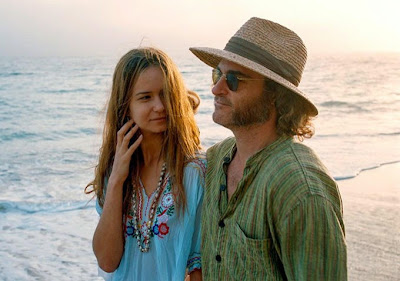 The return of an old girlfriend in 1970 kicks of a complicated mystery for private investigator Larry “Doc” Sportello (Joaquin Phoenix) in INHERENT VICE. Shasta (Katherine Waterston) is now involved with a wealth real estate developer, but she fears for his well-being and wants Doc to look into matters. While on the case he has run-ins with his nemesis, Los Angeles police detective “Bigfoot” Bjornsen (Josh Brolin), begins looking for another missing man somehow tied into this all, and is warned of drug smugglers known as the Golden Fang.

In INHERENT VICE the title is explained as something that can’t be avoided. In this instance it’s the 1960s being colonized by the 1970s. Doc’s world of dopers and revolutionaries is gradually giving way to those learning how to wring economic benefits out of a new generation’s political ideals. Often operating in a pot-fueled haze, he seems firmly committed to remaining among the counterculture, but for all of their integrity, he and his fellow misfits on the shore are fated to be washed away by the incoming tide. They haven’t been wiped out yet, but the songs on the soundtrack, including Sam Cooke’s “(What a) Wonderful World”, Kyu Sakamoto’s “Sukiyaki”, and The Association’s “Never My Love”, suggest a wistfulness for the present and recent past that will soon be gone.

The comedic bohemian mystery points toward Robert Altman’s THE LONG GOODBYE crossed with THE BIG LEBOWSKI. In adapting Thomas Pynchon’s novel writer-director Paul Thomas Anderson creates a sense of confusion from the sheer amount of information to sift through and players to keep straight. The complexity of it all is more of the point than being able to explain everyone’s motivations in the end, although upon closer examination it appears to all add up. The humor and resonant emotional turns experienced in this environment are what’s so pleasurable about INHERENT VICE.

Phoenix is a stitch as a drug-addled PI struggling to stay up to speed with the reams of information thrown his direction. As Bigfoot, Brolin is bluntly funny wielding a cop’s laser intensity and lack of regard for everything Doc stands for. Despite their differences Doc and Bigfoot need each other as mismatched informal partners with their fingers on the pulse of separate universes. They are destined to be at eternal odds, but it’s when they collaborate that the larger scheme can come into clearer focus.