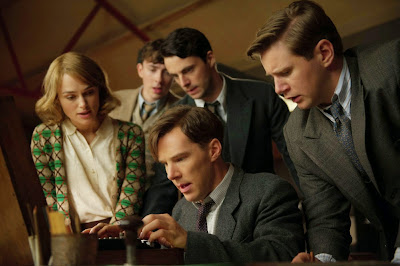 When 27-year-old mathematician Alan Turing (Benedict Cumberbatch) interviews with a British military commander in 1939 for a top secret program in THE IMITATION GAME, he is anything but humble about being the man for the job. Alan has figured out that they’re trying to crack the Germans’ code machine, known as Enigma. The challenge is steep. They have an Enigma that Polish intelligence smuggled out of Berlin, but it’s determined that 159 million million million possibilities exist for the settings. Alan and his team have eighteen hours each day to break the code before it changes. More time to decipher Enigma’s messages means more lives that are lost.

Alan’s social deficiencies threaten to have him lose his team and his position at Bletchley Park, but he gradually learns how to work with the others and gain their respect. Help comes in part from Joan Clarke (Keira Knightley), a valued member of the decryption team who has needed to be savvy about getting along with others in a male-dominated world. Alan devises to build a machine that will break every message every day instantly. As smart as he and his fellow codebreakers are, they face numerous setbacks, not to mention pressure from higher-ups because of the investment in their work that has yet to yield anything productive.

At first Cumberbatch’s portrayal of Turing puts this real life person on the verge of appearing as a buttoned-up Sheldon Cooper from THE BIG BANG THEORY. He’s the incredible genius with little comprehension of or need for social niceties. Thankfully his initial ignorance and arrogance is dialed back as the character acclimates to the high stakes matter at hand. Think more of the actor’s version of Sherlock Holmes than a sitcom brainiac. Cumberbatch does well at seeming like someone often lost in his head. Although he approaches interactions like equations to be solved, he shows how he makes the strategy work for him in most instances.

THE IMITATION GAME is most poignant regarding the importance of keeping secrets, although it’s not so much in relation to Turing’s homosexuality, which was considered criminal in his lifetime. Once he and his team cracked Enigma’s code, decision makers had to be selective about how they used it so that the Germans wouldn’t know the Allies had access to the messages being sent. That withholding meant deaths, although doing so was in service of preventing a greater number of them.

With its important subject, handsome MASTERPIECE THEATRE-like production design, and British accents, THE IMITATION GAME resembles an awards-collecting machine, which isn’t to dismiss it. THE IMITATION GAME is an entertaining piece of fictionalized history that crackles with the excitement of watching intelligent people and a primitive device achieve something considered impossible. Director Morten Tyldum smoothly guides developments along, although some war montages and end title cards assume the audience’s historical knowledge is so low that it feels a little condescending. The film can be so insistent to trumpet its own import and prestige that it has to underline some things too much. Nevertheless, THE IMITATION GAME provides an involving look at the greatness human minds in cooperation can achieve.