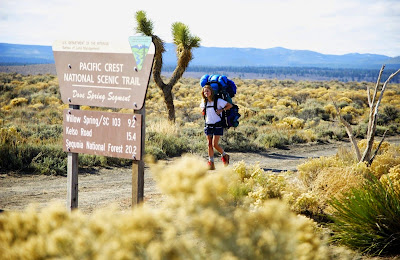 In WILD Cheryl Strayed (Reese Witherspoon) sets out to walk the Pacific Crest Trail as a means of self-renewal after hitting bottom in her personal life. Consumed by her immense grief for the death of her 45-year-old mother Bobbi (Laura Dern), Cheryl turned to casual sex with strangers and heroin use, which destroyed her seven-year marriage to Paul (Thomas Sadoski). The thousand-mile solo hike from the Mexican to Canadian border is what she feels she must do to regain control of her life.

Upon her divorce Cheryl assumed the new last name Strayed as though taking on a scarlet letter to announce her waywardness to the world. Her self-punishing streak is also evident as she embarks on her journey in search of inner peace and redemption. She carries an enormous, heavy pack others dub The Monster because of its impractical weight and size. It’s as though her emotional baggage is manifested in the supplies she struggles to tote along. Having brought the wrong fuel for her stove and ill-fitting boots, Cheryl is not fully prepared for the trek. Those who’ve trained and planned extensively about how to complete the trail discover themselves pushed to their limits, and here’s Cheryl making it harder than it needs to be.

Cheryl’s great feat in WILD then turns out to be accepting her history as what has made her who she is now and forgiving herself for the mistakes that have brought her to this personal crossroads. Witherspoon plays Cheryl so that she is exposed but never pitiable. With much of the character’s struggle taking place internally while alone, Witherspoon often doesn’ t have other actors or dialogue to assist with conveying how Cheryl is processing her experiences. While flashbacks clarify what has brought her to these points, WILD relies on Witherspoon to create the character through showing how she’s thinking and reacting. Whether a prospective student body president in ELECTION or an underestimated aspiring lawyer in LEGALLY BLONDE, Witherspoon has excelled at playing strivers. As Cheryl she couples that quality with self-questioning to pursue the answers she requires.

WILD is felt most immediately when it captures the vigilance necessary for a woman traveling by herself. As with the wild animals she encounters, Cheryl must step cautiously around men she comes upon. Some are potential threats while others aren’t, but the need to have her antennas attuned to the situations and her surroundings never dissipates. Her cautiousness in the wilderness and civilization highlight the additional risk and courage involved with her quest.

Rather than revealing Cheryl’s troubled past from the outset, director Jean-Marc Vallée and screenwriter Nick Hornby use flashbacks to dole out pieces of Cheryl’s backstory as she makes her way north. Sometimes it interrupts the sense of solitude important to the trip, but the technique succeeds in allowing us to discover the character as she assesses her life.