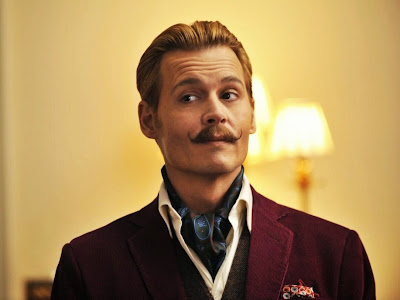 MORTDECAI features a type of comedy that has fallen out of fashion in mainstream American cinema. Although this farce doesn’t lack broad humor and innuendo, it prizes light silliness and suggestion over blunt vulgarity. Recurring jokes rely on the protagonist’s unusual and unreciprocated fondness for his curly facial hair than scatology. In fact, this is the mildest R-rated comedy to hit theaters in who knows how long, and it probably contains less objectionable content than many PG-13 films. Screenwriter Eric Aronson, adapting a Kyril Bonfiglioli comedic novel, seeks laughs through wordplay and the gentrified class’s out of touch behavior. Director David Koepp dresses the film in a Continental style and attitude, linking it more with 1960s comedies than contemporary lowbrow entertainment. While MORTDECAI’s mystery-solving husband and wife don’t work together much on screen, Koepp may also be trying to draw a line from THE THIN MAN films of the 1930s and ‘40s to the loving couple in his movie. If only MORTDECAI were funnier.

Mustachioed, gap-toothed Lord Charlie Mortdecai (Johnny Depp) owes £8 million in back taxes and is on the verge of insolvency when a last ditch opportunity to make an enormous sum of money without selling any possessions presents itself. A restorer in Oxford has been murdered, and the Goya painting she was working on has been stolen. Mortdecai’s connections to the seedier side of the art collecting world means that old school chum and MI5 inspector Alistair Martland (Ewan McGregor) must turn to him for assistance in locating the painting. If successful, Mortdecai stands to make a substantial amount for his efforts.

The task comes with its share of danger, as terrorist Emil Strago (Jonny Pasvolsky) is suspected of murder by crossbow and art thievery. While Mortdecai and his manservant Jock (Paul Bettany) bumble their way into trouble and upon various clues, his wife Joanna (Gwyneth Paltrow) conducts her own investigation by exploiting Martland’s lengthy infatuation with her to learn key information. All parties know the missing Goya is valuable, but they come to learn that it could be a long-lost masterpiece also rumored to have a code to Hermann Göring’s Swiss bank account scrawled on the back. If this is indeed the case, it is worth an unimagined fortune.

The preponderance of mustache-related humor represents a severe miscalculation by the filmmakers. Depp looks suitably ridiculous with what rests above his upper lip, but MORTDECAI goes all-in on with numerous jokes about this characteristic as if the defining hairy growth is so inherently hilarious that it merits quips at its expense with clockwork regularity. Mortdecai encountering Los Angeles hipsters with ornate facial hair marks one of the rare occasions when a follicular jab hits an easy target, but it hardly compensates for all the other failed attempts.

Depp, seemingly in Peter Sellers mode, can be amusing playing clueless privilege, as when he mistakes a hotel key card for a credit card, although too often he counts on the mustache to generate comedic delight. He’s more successful revealing the character as an overgrown child, such as the time when he touches a cactus’s spine and exclaims in pain, as if there could be any other outcome. MORTDECAI also needs more sly, witty exchanges like the one in which Joanna asks Martland if he thinks she could keep a secret about having an affair and then dismisses it as pointless when he suggests she could get away with it. MORTDECAI perks up in those moments when given over to its fizzy nature, but returning to those mustache jokes and getting bogged down in plot in the third act flattens what mild charm bubbles to the surface.