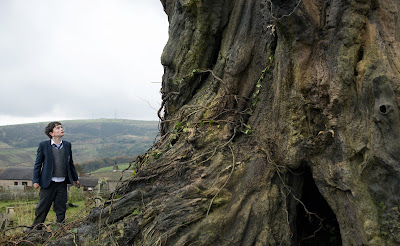 In A MONSTER CALLS Conor O’Malley (Lewis MacDougall) is old enough to understand that his mother (Felicity Jones) is seriously ill but doesn’t have sufficient years to deal properly with the emotions her sickness brings. He struggles to sleep at night and is bullied at school during the day, all the time worrying about the welfare of this dearly beloved mom. Conor has no one else he can safely confide in. He is at odds with his grandma (Sigourney Weaver) and is upset with his dad (Toby Kebbell), who has remarried and lives a continent away in Los Angeles.

From his bedroom window the British boy can see in the distance a mighty yew tree in an old church graveyard. One night at 12:07 the tree transforms into a monster that confronts Conor. The Monster (Liam Neeson) tells him that he will visit him at the same time to tell three stories. When the last tale has been told, it will be time for Conor to share his nightmare.

The Monster’s stories of royal deception, medicine versus faith, and an invisible man are sumptuously rendered in watercolor animation but not exactly suited for bedtime. Each challenges Conor with contradictions and unfairness than clear-cut examples of good triumphing over evil. For a boy seeking restored order, these complicated parables do not provide immediate relief. If anything, they reinforce the inequity handed to him and the person he loves most. Yet the Monster is helping Conor through the grieving process and giving him the tools for owning up to the truth that pains him most of all. There’s just no easy solution for guiding him to that point.

Director J.A. Bayona treats this weighty material with Spielbergian flourishes. The fantastical elements in A MONSTER CALLS lift the film above the mostly barren country terrain, not for the purposes of escape but to gain greater perspective. Bayona makes impressive use of scale to convey the emotional difference between something obsessed over in close-up and taken in with a wide view. The film’s interiors can be as dim and suffocating as the mental experience of fixating on a problem.

Like Steven Spielberg, Bayona displays a deft understanding of a child’s point of view in extraordinary circumstances. A MONSTER CALLS doesn’t feel as though an adult’s sensibility is imposed on it. Conor is given the leeway to be vulnerable and lash out, which MacDougall does without sentimentalizing his character. He plays the part with the protective toughness that a kid might naturally develop in the absence of greater support from grown ups. A MONSTER CALLS approaches the ordeal with imagination and empathy to allow the young to manage the worst.