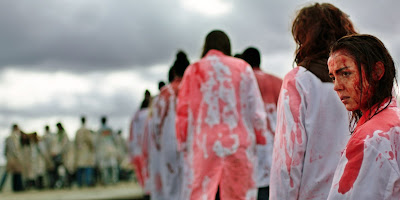 Justine (Garance Marillier) grew up in a vegetarian household, and she fully intends to maintain her principles when she begins veterinary school in RAW. Animals are for assisting, not eating. Her older sister Alexia (Ella Rumpf) has been going to the school, but rather than provide full cover for her inexperienced sibling, she insists that Justine learn to deal with the hazing that the older students dole out. Justine is willing to put up with most of the demands, like how to dress or address her senior peers. She draws a line, though, when asked to consume raw rabbit liver.

Assuming Alexia refused to take part in the ritual, she calls upon her for support. Instead Alexia eats some and then forces one of the organs into her mouth. Justine has a bad reaction, breaking out all over in a rash. This first taste of meat will not be her last, as she finds herself craving it in spite of how she was raised. Having erased one taboo, Justine finds herself wanting the truly forbidden, human flesh.

Writer-director Julia Ducournau applies the art horror treatment to an otherwise familiar coming of age story. RAW is about a young adult on her own for the first time and who experiments with the freedom that comes when there are no watchful eyes. Justine’s turn from herbivore to cannibalistic carnivore is just an exaggerated version of the sheltered kid who goes to college and engages in all manner of reckless acts because mom and dad aren’t nearby. RAW’s provocations aren’t reactionary means for a moralizing end but disturbing and, at times, darkly funny observations of the wildness that can come with independence.

Ducournau depicts the gore like an anthropologist might nonjudgmentally write about a custom that is revolting to her native culture or as a naturalist might consider a predator . The matter-of-fact quality to the violence lends more potency to it and queasily charges scenes of Justine wolfing down shawarma and gnawing on a raw salmon fillet. The ferocity of her appetite and how she tries to mitigate it make up the internal struggle she needs to resolve.

Marillier presents Justine as a meek and disciplined person who hasn’t questioned the world. She knows the rules and abides by them, so facing a fundamental conflict between her guideline and the group’s norm casts everything in a new light. Marillier doesn’t cut an intimidating presence, yet in discovering her taste for people, she builds uninhibited danger into the mere way she looks at someone. Not knowing what you are capable of until you try can be a good thing. In RAW it’s also the scariest thing to learn about oneself.