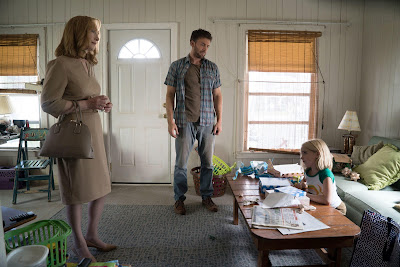 Frank Adler (Chris Evans) is trying to do the best for his seven-year-old niece Mary (Mckenna Grace) in GIFTED, but he faces a major challenge in deciding how to raise this precocious first grader. Frank saw how his brilliant sister Diane--Mary’s mother--was not granted the chance by their mother Evelyn (Lindsay Duncan) to have a typical life. As Mary is under his care, he feels a responsibility to his sister and exceptionally bright niece to provide her with a normal upbringing around regular kids.

Family friend and neighbor Roberta (Octavia Spencer) warns Frank not to enroll Mary in the nearby public school, fearing that doing so will draw attention to them. Sure enough, Mary quickly dazzles her teacher Bonnie (Jenny Slate) with her math proficiency and gets in trouble for being mouthy and assertive. The principal recognizes that Mary will not be challenged at their school and offers to set her up with a scholarship to a private academy, which Frank rejects. His actions lead to his mother learning where they are and what is happening. Spotting the opportunity for Mary to complete the rigorous work that Diane didn’t, Evelyn sues Frank for custody.

GIFTED weighs whether it is more neglectful for an uncommonly talented child to be brought up with the rewards and pressures of being a presumed genius or to be unchallenged intellectually but allowed to grow up with what passes for normalcy. Are Evelyn’s ambitious intentions worse than Frank’s desire to trade academic opportunities for an ordinary life, or is limiting a child’s potential worse because of a philosophical difference of opinions? The problem is that director Marc Webb and screenwriter Tom Flynn have set up a false choice. Mary doesn’t have to subjected to crunching numbers and reading books every waking hour, nor must she be relegated to classes that don’t test and expand her abilities so she can be a Girl Scout and have friends.

The filmmakers know this, of course, yet have chosen a binary view of the circumstances for dramatic convenience. A better film would have struggled over finding the proper balance rather than casting the situation in either/or terms. GIFTED puts a heavy finger on the scales to favor Frank by having him face off with a woman so singularly obsessed with having her daughter’s work be completed that she will consign her granddaughter to the same restrictive formative experience without a second thought. For Evelyn this custody battle is about professional achievement through reflected glory and nothing else, so audience sympathies will naturally be directed to Frank instead.

It may be more satisfying to have a clear villain to root against in GIFTED, but Frank’s complex feelings and motivations are sufficient for taking a deeper look at the difficulties of raising a preternaturally smart child. Evans does nice work expressing the uncertainty and exhaustion that come with the territory. Roberta’s forewarnings suggest that he might even have wanted things to come to this because he’s tired of hiding in plain sight with Mary and isn’t sure he can bear the burdens that are only going to increase. GIFTED works best when it focuses on how Frank and Mary relate and how they have been getting by to this point. The fundamental aspects of their lives are demanding enough that they don’t need to be tugged upon by writerly conventions to make them more substantial.