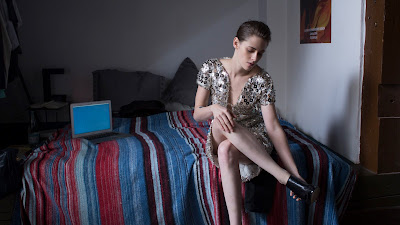 Maureen (Kristen Stewart) makes a living selecting clothes and accessories for her wealthy celebrity client Kyra (Nora von Waldstätten) in PERSONAL SHOPPER, but she draws little fulfillment from the work. She’s surrounded by all this luxury but cannot partake of it. Additionally, she still mourns the death of her twin brother Lewis with whom she shares a heart abnormality. The brother and sister also claim to have the gift of being mediums. They made a pact that whoever died first would contact the other sibling from the beyond.

Maureen stays at Lewis’s house waiting for a sign from him but receives nothing that she interprets as definitive proof. One night she has contact with a ghost, but who it is and what it wants is hard for her to determine. She then begins receiving texts from an unknown entity, possibly Lewis but perhaps another spirit or someone living. As Maureen communicates with whoever is on the other end, she becomes more distressed about the life she has put on hold to resolve whether her brother can still talk to her.

Writer-director Olivier Assayas often uses PERSONAL SHOPPER’s widescreen frame to capture Maureen alone in large spaces, conveying the character’s freedom of movement and absence of direct contact. This is a visual reflection of the modern experience, the virtual ability to go anywhere yet remain disconnected from anyone. Maureen could be interacting with the dead, the living, or her own thoughts feeding delusions brought on by grief and isolation. She travels from Paris to London and back trapped within what’s going on in her head and the sometimes hostile text conversation with her unknown correspondent. This tense and lengthy passage in which most of the action is sending and awaiting SMS responses strongly depicts the experience of falling down an electronic rabbit hole of online activity to the elimination of anything outside the bubble.

Stewart’s remarkable performance is fueled by her detachment. It’s as though she’s there and not there, which aligns with Maureen being physically present and mentally afar. When she acts impulsively, such as secretly trying on Kyra’s clothes when she is expressly forbidden from doing so, it’s as though an invisible woman has materialized all of a sudden. The character is someone who makes an effort not to be seen, so to reveal herself is as shocking as anything. Stewart also says a lot about Maureen in the small movements of her thumbs as she texts, letting a quiver of them express more than a monologue.

Among the various topics Assayas touches upon, grief is the most potent and pertinent. Maureen has been badly rattled by her brother’s death, and it informs her very being from moment to moment. Whether one believes in her gift or not, what matters is that she does. Her ability to commune with the dead worsens her emotional struggle. Just like the expensive things she handles for others but does not possess, she has access to the spiritual plane but the frustration of unclear messages being received. Although her dilemma occurs within a ghost story, Maureen’s situation is not much different than a religious believer searching for the voice of God but unable to decipher what is thought to be heard.