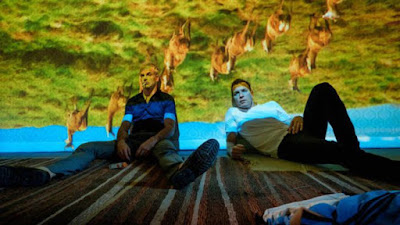 Twenty years after stealing money from his friends in TRAINSPOTTING and absconding to Amsterdam, Mark Renton (Ewan McGregor) returns to Edinburgh, Scotland. The death of his mother in T2 TRAINSPOTTING brings Mark home after such a long time gone, but he decides to revisit his old pals while he’s back in town. The intervening years have not treated them well. Daniel “Spud” Murphy (Ewen Bremner) continues to struggle regularly with a heroin addiction. Simon (Jonny Lee Miller) has switched up the drug that has him hooked these days, and he indulges in it in the time between running a failing pub and blackmailing the men he entraps with the help of Veronika (Anjela Nedyalkova), a Bulgarian woman who sees herself as more business partner than girlfriend. Francis Begbie (Robert Carlyle) is serving a long-term prison sentence, which is to Mark’s benefit until the volatile Scot escapes. Despite what he says, Mark’s life isn’t substantially better than theirs.

Although Mark provides restitution to Simon for what he took two decades ago, Simon still smarts at the betrayal. He intends to gain his revenge by rekindling his friendship with Mark, teaming up on a business venture, and then ruin him. Mark’s reunion with Spud resulted in saving him from killing himself. Now Mark hopes to supplant his friend’s harmful addiction with a healthier one. Meanwhile, Begbie returns to his old ways and looks forward to having his son join him in his illegal pursuits.

In TRAINSPOTTING twentysomething junkies Mark and Simon talked about the brief window in life when you have “it” and then “it” is gone. They’re speaking in regard to musicians, actors, and athletes, but they could just as well be referring to their future selves. Their lives were certainly nothing spectacular then, but through the gloom of their unsatisfactory present in T2 TRAINSPOTTING and the fog of nostalgia, that period looks like their heyday. As a young adult Simon believes that everyone accumulates years and can’t hack it anymore. He’s correct in the sense that if you choose to live by such a philosophy, what a drag it is getting old.

So the characters wallow in their self-pity and self-destructiveness, striving to regain what mostly wasn’t so great the first time around. They return to bad habits, make many of the same mistakes, and, incidentally, have their share of good times. In both films director Danny Boyle shows what could attract them to such wasting-away lifestyles and sets their zonked-out bliss to pulsing soundtracks. It doesn’t look like my idea of fun, but Boyle succeeds at showing the attraction even as he offsets it with ample scenes illustrating the high costs.

T2 TRAINSPOTTING isn’t as joyful as its predecessor and appropriately so. However misguided, there’s more romance in youth being careless than middle-aged men behaving the same way. While this lot has often decided poorly, Boyle and screenwriter John Hodge place these choices within the context of the economic limitations in their surroundings. It’s not an excuse, but it is a symptom. As Boyle does frequently in T2 TRAINSPOTTING, the thrilling final sequence juxtaposes the past and the present. It also bookends the films with Iggy Pop’s “Lust for Life”. While a lot hasn’t changed for the character as the remixed track roars, there are some differences to give hope that maybe the past won’t always be repeated.