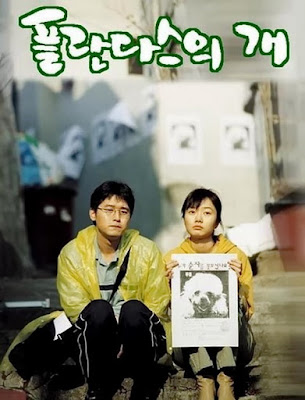 A yappy little dog somewhere in the big apartment complex irritates the unemployed Yun-ju (Lee Sung-jae) to no end in the South Korean dark comedy BARKING DOGS NEVER BITE. When Yun-ju finds what he believes to be the offending canine, he disposes of it. To his dismay, he learns that he got rid of the wrong dog and now must abduct and kill another. Even worse, his pregnant wife brings home a dog to dote on.

Bookkeeper Hyun-nam (Bae Doona) takes note of the increase in residents wanting her to approve flyers about their missing dogs. From a distance she is horrified to spot Yun-ju tossing one off a building. Hyun-nam is also determined to bring him to justice for this because the fame in catching him to justice may provide financial rewards. A janitor (Byun Hee-bong) for the buildings doesn’t mind coming across these dead dogs because he can add them to the soup he makes in the basement.

BARKING DOGS NEVER BITE has a twisted sense of humor that will undoubtedly offend some viewers’ sensibilities. The film opens with a statement that no animals were hurt in its making, and it t is not graphic in depicting the ends the unfortunate pooches meet. Nevertheless, the premise and some images are likely to be upsetting to some prospective audience members. For those who can get past such obstacles, director and co-writer Bong Joon-ho provides a series of inventively funny scenarios, whether from misunderstandings, pushing the boundaries of good taste, or a combination. Sometimes he applies a live-action cartoon style, particularly during foot chases, which helps to cue that the film intends for it be received with a lighter tone despite the darker comedy.

As Bong’s debut feature, BARKING DOGS NEVER BITE is marked with first film shortcomings. It takes awhile to settle into its unhurried pace. Scenes often unspool deliberately rather than with a flurry of jokes, highlighting his ability to craft individual moments and struggle to connect them meaningfully. The film finds a rhythm that makes sense in the larger picture--it is, to some degree, about the experience of time when stuck personally and professionally--but the storytelling can breed impatience. There’s a brashness to the film’s risks that feel somewhat like a young filmmaker determining what he can get away with, although to Bong’s credit, the film doesn’t play as a work of meaningless provocation.

Economic and social concerns underpin BARKING DOGS NEVER BITE that may be more immediately obvious to native audiences or those who saw it during its initial release. The satirical elements linking it with the novel A DOG OF FLANDERS and commenting on the Asian financial crisis of the late 1990s were lost in translation for me to a point, which may be why the dramatic turns feel grafted onto the back stretch. Yun-ju is demoralized by his trouble finding a job as a professor. He’s further disenchanted that he only catches a break via an acquaintance’s accidental demise and his ability to submit a bribe to the dean. Hyun-nam and her friend bank the improvement of their stations in life on the turn of the century equivalent of going viral. Unlike the dogs that people lavish unconditional love on, these characters feel like strays. BARKING DOGS NEVER BITE thus casts a hard look at why the cruelty visited upon the animals is so shocking while comparative treatment to humans goes ignored.