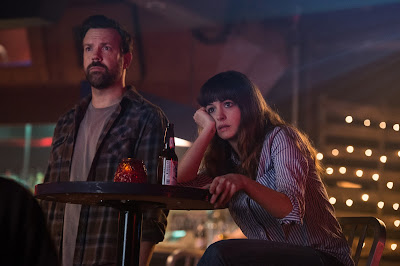 In COLOSSAL unemployed writer Gloria (Anne Hathaway) moves from New York City back to her parents’ empty house after her self-destructive ways become too much for her boyfriend Tim (Dan Stevens). Gloria catches a break when she runs into Oscar (Jason Sudeikis), an elementary school friend with whom she’s long lost touch. He’s eager to help her out, including giving her a part-time job at his bar, although that may not be for the best considering her troubled relationship with alcohol.

Life gets much more complicated for Gloria when, twenty-five years after first appearing in Seoul, a giant monster again manifests out of thin air in the South Korean capital. The significance of this isn’t immediately apparent, but Gloria comes to realize that somehow she is connected to the kaiju. If she sets foot within a playground’s boundaries at the right time, the creature materializes a continent away and follows her movements. Not only is this supremely strange, it also gives Gloria reason to be remorseful for the inadvertent damage she wreaks as this monster.

Gloria’s bond with the beast functions as an inventive allegory for problematic drinking, although that perspective has a limit. Whether in her blacked-out stupor or monstrous self-projection, she has a habit of causing harm to those around her. Hathaway avoids giving a mannered performance, favoring instead a more casual way of acting that highlights the character’s ability to function while noticeably in need of a healthier lifestyle and self-image. COLOSSAL skirts the question of if Gloria is an alcoholic, in part because that subject is not what is of primary interest.

While the film looks like it may view the Hathaway-starring drama RACHEL GETTING MARRIED or Billy Wilder’s THE LOST WEEKEND through a contemporary genre lens, writer-director Nacho Vigalondo has a different target in its sight. To reveal in depth what’s really being explored would spoil the pleasure of discovering it for oneself. Suffice it to say that it seems deliberate for Vigalondo to hide the pill inside a film likely with the most surface appeal for a young male audience. The purpose of the trick is to evoke empathy in those who might be more resistant if Vigalondo was more direct about what he wants to address.

COLOSSAL could get to the point faster than it does and would benefit from smoothing a pivotal character shift that seems rather abrupt even if, in retrospect, the revealed qualities were there all along. The sarcasm Sudeikis often brings to roles can make him seem insincere, but that trait serves him well in a character whose motivations are submerged. The film’s humor lightens the heavier thematic components and provides a great exclamation point. Although COLOSSAL is a bit ungainly, this unusual comedic mash-up of monster and message movie profits from its ambition.