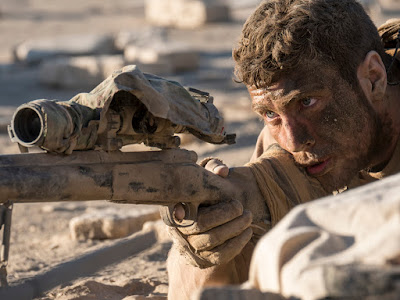 The Iraq War is officially winding down in 2007 in THE WALL, but fulfilling their duties are no less dangerous for Staff Sergeant Shane Matthews (John Cena) and his spotter Allan Isaac (Aaron Taylor-Johnson). The pair are summoned near a pipeline under construction where an Iraqi sniper has been picking off contractors. They are on the scene to ascertain whether there are any survivors and if they can find the enemy responsible for killing with surgical precision.

Scanning the site from a distance while camouflaged, they determine that no one is alive but are less certain if the gunman might still be in the vicinity. Matthews grows tired of waiting and approaches the construction scene. It’s not long before a bullet strikes him and brings him down. Isaac attempts to come to his help, but unable to locate the sniper, he is also shot and is forced to take shelter behind a crumbling wall. His radio is damaged in the exchange, so when he is able to make contact with his communications device, the voice on the other end belongs to Juba (Laith Nakli), the hidden Iraqi responsible for all of these casualties.

THE WALL provides a good example of how direction and editing can enhance what is on the page. The screenplay by Dwain Worrell could be realized as a stage play mounted on a shoestring budget and not lose its essence. That quality doesn’t inherently detract from the film but reveals its limitations. THE WALL is primarily a dialogue between Iraq War counterparts that hits familiar notes about soldiers on opposite sides of a conflict. The film feels most vital when the conversation is about the matter at hand and digs into the cat-and-mouse tactics each man employs to gain advantages. Exploring this single faceoff as emblematic of the larger conflict yields more ordinary observations.

What Worrell brings to the film isn’t to be discounted, but director Doug Liman keeps this showdown tense when the story and dialogue fade in urgency. THE WALL has something of an exercise or challenge aspect to the production. It’s as though it is being made under limitations for the sake of prompting more creative decisions. Liman and editor Julia Bloch are up to the task as they never lose sight of the real-time (or mostly real-time) pressures and constrain the film’s perspective to what Isaac can see with the naked eye or his busted scope.

With Juba existing as a disembodied voice, he assumes the mantle of confessor and executioner. Isaac continues to live not out of mercy but so he can account for his and his country’s sins while receiving no promise of absolution for either. The desert setting lends to the impression of Isaac and Juba’s interaction harkening to a stark, primitive time when man felt more deeply vulnerable to an unseen interlocutor in control of his fate. THE WALL is not obliged to resolve the issues it inspects about this particular war, but its bitter conclusion smacks of a beginner’s casual understanding of nihilism. The pessimism isn’t necessarily uncalled for; it just seems like the easiest way out.