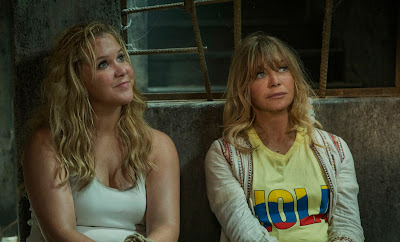 In SNATCHED Emily Middleton (Amy Schumer) loses her job and boyfriend in quick succession, meaning that the timing for her imminent, nonrefundable vacation for two to Ecuador comes when she needs it most and can least afford it. Unable to find a friend interested to take her ex’s spot, Emily persuades her mother Linda (Goldie Hawn) to tag along. Linda is a worrywart who is happy to lay around the resort reading books than seeing the sites. Hotel guests Ruth (Wanda Sykes) and her best friend, retired Special Ops agent Barb (Joan Cusack), confirm Linda’s fears about being vigilant for one’s safety while out of the country.

Emily disregards them and sidles up to handsome stranger James (Tom Bateman), with whom she has an amazing night experiencing the area like a local. Emily convinces her mother to join her and James on a day trip that ends with the validation of Linda’s worst anxieties. They are abducted and held for ransom. Their best hope for rescue rests back home with Emily’s agoraphobic brother Jeffrey (Ike Barinholtz) even as they escape from their captors and end up lost in the Colombian countryside.

Teaming up heroes across a shared universe is the go-to strategy for event pictures these days. In bringing together most prominently Schumer and Hawn, who returns to the movies after fifteen years, SNATCHED does something similar with funny women in film. It’s a good idea in theory even if it doesn’t always translate in practice. In spite of the equal billing, Hawn is often underutilized, especially because her character isn’t on screen for a significant portion of the film’s ninety minutes. She has a good rapport with Schumer but deserves more opportunities to show off her comedic chops than this second fiddle part. Christopher Meloni’s supporting role as an expedition leader produces bigger and more memorable laughs than the presumptive co-lead.

As the main character it’s hard to suggest that Schumer steals a movie that basically belongs to her anyway. Regardless, her TRAINWRECK follow-up reasserts her talents as a film comedian. She’s game for whatever Katie Dippold’s screenplay throws her way, and that comfort allows her to shrug off the humiliating lengths her character will go to in pursuit of her desires. Although Emily bares a neediness that leads her into embarrassing situations, Schumer plays it as a strength in expressing herself instead of exposing a pathetic, mewling quality. She’s good-humored about it, which is why she can pull off a scene as mortifying as the one when her date accidentally sees her in a compromising position as she gets cleaned up for a night out.

The humor in SNATCHED is certainly not refined but exudes puckish vulgarity that grants more leeway for the dirtiest jokes and a hilarious gross-out gag with a tapeworm. The playfulness also helps to gloss over the the potentially troublesome stereotypes the film imposes on many of the South American characters. SNATCHED appears to be laughing at the distorted views of this part of the world as shaped by the news, but it’s fair to consider if it is reinforcing them. The takeaway from the film isn’t such depictions, though, but Schumer’s willingness to go for broke.