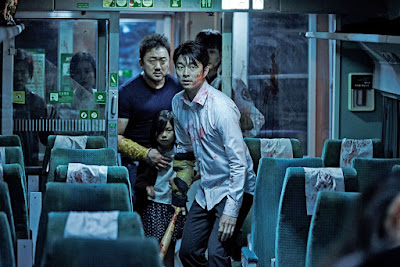 The passengers on a train bound for South Korea’s second biggest city see news reports of riots breaking out across the country but expect they are largely shielded from it as they zip across the land in TRAIN TO BUSAN (BUSANHAENG). Unfortunately for them, an infected person slipped onto the train without notice and starts turning others on board into zombies.

Among those fighting for their lives are fund manager Seok-woo (Gong Yoo) and his young daughter Soo-an (Kim Soo-an), a high school baseball team; and a pregnant woman (Jung Yu-mi) and her husband (Ma Dong-seok). A large number of riders emerge unscathed from the initial attack after noticing that the zombies lack object permanence. If they can’t see you, whether in the dark or by covering a window, they won’t pursue. The passengers plan to disembark at the next station, but when it proves to be overrun with the living dead, the best choice is to get back on the train, even with its threats, and go to Busan, which is reportedly still open.

TRAIN TO BUSAN bolts through its stripped-down premise like the fast zombies terrorizing South Korea. Director Yeon Sang-ho, a co-writer with Park Joo-suk, uses the urgency and efficiency in the zombies-on-a-train scenario to keep the film in a constant state of tension once the outbreak begins. It’s the kind of genre exercise that is essentially bulletproof. Put people in a contained space with their antagonists, and let the survivors get sorted out. Yeon and Park come up with several different situations for the humans to fend for their lives as though they are video game heroes completing levels. Pace and novelty are maintained while characterization and topical interests lag behind.

TRAIN TO BUSAN’s lack of backstory is a virtue because there isn’t a pressing need to know why this is happening, just that it is. The details that might bring more color and resonance to the struggle get papered over amid the excitement of sticking close to the protagonists as they try to avoid nasty bites. The characters are ciphers who don’t need names because each with any prominence has an identifying characteristic while the rest serve as set dressing. Whether or not the passengers abide by the Golden Rule carries significance, but the simplistic sprinkling of thematic import hardly provides serious contemplation of the pros and cons of altruism.

Still, this lean and vicious zombie movie is effective in a visceral way. Those in the hungry mob are unsettling with their spastic movements. TRAIN TO BUSAN isn’t especially gory, but the quickness and violence of the attacks and the snarling sounds imply visions of more horrific wounds than what gets seen. Although the film doesn’t aspire to achieve much beyond the basic thrills, it’s sufficiently satisfying in that regard.