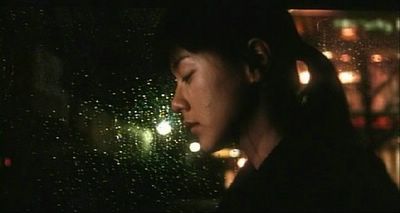 MABOROSI (MABOROSI NO HIKARI), director Hirokazu Kore-eda's first narrative feature, opens with a young girl chasing after her grandmother and pleading for her to return home. The old woman explains that she wishes to die where she was born. She continues on her way, undeterred by her granddaughter. A young woman named Yumiko (Makiko Esumi) awakens. Although she was dreaming, this event happened when Yumiko was a girl. Her husband Ikuo (Tadanobu Asano) tells her that he is not the reincarnation of her grandmother. Ikuo implies that unlike the old woman, he is not going somewhere never to return.

Yumiko and Ikuo are new parents who appear to be deeply in love. Then one night Yumiko is awakened by an ominous knock on the apartment door. She is summoned to a police station to identify a man who was run over by a train. Yumiko doesn’t see the body, or what remains of it, but can confirm that the person killed was her husband. This incident is tragic enough as is, but apparently Ikuo committed suicide, walking the same way as the train and ignoring its horn and squealing brakes.

A few years later Yumiko has been matched with another man for marriage. She and her son move from the city to the country and the seaside home of her new husband and his daughter. She becomes integrated into the community, but her new life is still haunted by questions she has regarding her husband’s death.

MABOROSI, which roughly translates as "strange light", delicately explores the survivor’s mourning and grief. Hirokazu's second film, the brilliant AFTER LIFE (WANDAFURU RAIFU), examines death via the experience of the deceased. Together the two provide an intriguing balance, with MABOROSI naturally being the sadder film. 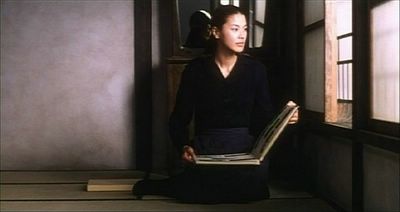 The arresting opening scene efficiently sets up what MABOROSI covers. Yumiko’s experience with her grandmother has given her a very specific fear of death. Without reason or foreknowledge, someone is gone. Despite one’s best efforts, one cannot stop death. Why do people choose to die, to quit living? Her grandmother seems to know her time is near and wishes not to fight the inevitable. Ikuo, on the other hand, would seem to have no reason to commit suicide, yet he does. While the grandmother’s death might be easier to accept, it still elicits feelings of anger and confusion in Yumiko because she chose to stop living. Does the dream indicate that Yumiko intuitively or subconsciously senses similar feelings in Ikuo? Possibly.

Hirokazu quickly establishes a very special, endearing relationship between Yumiko and Ikuo. It is important he does. When Ikuo abruptly dies, the loss she feels can be better understood. The world becomes large and empty. Hirokazu underlines this feeling of smallness and insignificance predominantly through the use of long shots and filling the soundtrack with loud, ambient sounds. The long shots create an overwhelming world to inhabit, one in which everything is distant. The use of natural light often makes scenes dark, as if much of the light on earth has been snuffed out with Ikuo’s death. The constant sound, whether the roar of trains, the sea, the radio, or crickets, becomes deafening to one in search of silence. There is no rest, no escape for the mourning.

Hirokazu's films are notable for their soothing, meditative qualities. To the impatient viewer they may seem slow, but those who succumb to his rhythms can enjoy another world where the constraints of time are washed away. MABOROSI doesn’t have a large arc because the film refuses to advance until Yumiko reaches an acceptance of Ikuo’s death. 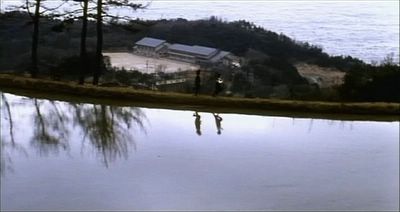 Masao Nakabori’s exquisite cinematography shows new and stunning ways of seeing the world. The careful shot composition reaches its artistic peak when the new brother and sister run and explore the land of the country. A shot in which their running reflections are mirrored in the water is especially spectacular. Ming Chang Chen’s score finds an appropriately beautiful and melancholy tone.

During the past decade Hirokazu has built a small but strong body of work that places him along the best modern directors. He's also one of the most empathetic filmmakers, softly guiding viewers through his meditations on life and death.

(This is a revised version of my DVD review. Follow the link for more information on the quality of and features on the DVD.)
Posted by Mark Pfeiffer at 7/17/2005 12:23:00 AM