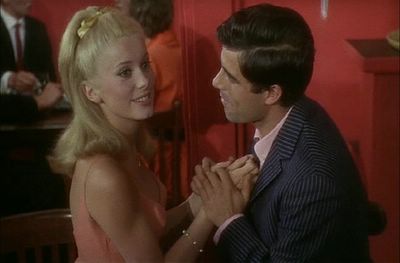 One of the greatest films of all-time, Jacques Demy’s THE UMBRELLAS OF CHERBOURG (LES PARAPLUIES DE CHERBOURG) is a colorful musical which was nearly lost forever. The original negative was damaged to the point where it could not be repaired. Release prints underwent a cheaper process which led to the fast fading of colors. Demy made a high quality tri-color print in 1963, and luckily no color fading had occurred in it when the choice was made to restore the film. The restoration effort resulted in a new negative in 1992 with the sound remixed in Dolby Stereo by Demy’s widow Agnès Varda and UMBRELLAS composer Michel Legrand.

Seventeen year-old Geneviève (Catherine Deneuve) works in her widowed mother’s shop during the day and spends evenings with her new love Guy (Nino Castelnuovo). They fantasize about their future together, and as befits their youth, their options are limited to what they know. Perhaps they’ll sell umbrellas, as she does at the eponymous family business, or work at a gas station, which is Guy’s place of employment.

Geneviève and Guy are seeing each other on the sly. Guy initially avoids telling his sick godmother Aunt Elise (Mireille Perrey) what he will be doing and with whom he will be going one night. Geneviève tells her mother Madame Emery (Anne Vernon) that she and a girlfriend have activities planned. When she learns of the romance, Geneviève’s mother insists that her daughter is too young. These are minor obstacles, though, when two young people are in love, and all is right with the world.

But trouble descends upon the deliriously happy couple. The umbrella shop faces financial difficulties. Madame sells her necklace to help pay the bills. The purchaser, Roland Cassard (Marc Michel), is a young man who may also have eyes for Geneviève. Bad news arrives when Guy finds that he has been drafted for military service in Algeria and must report for a two year tour of duty. Will absence make their hearts grow fonder, or will the separation tear them apart? 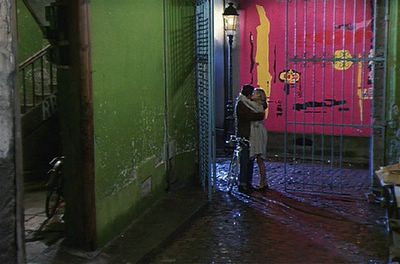 THE UMBRELLAS OF CHERBOURG deviates from other romances, and other films, in that all of the dialogue is sung, from sweeping declarations of amour to everyday pleasantries. (Demy also used the same technique in his 1966 film THE YOUNG GIRLS OF ROCHEFORT [LES DEMOISELLES DE ROCHEFORT].) THE UMBRELLAS OF CHERBOURG differs from other musicals in that it plays almost as if it’s one long song rather than several distinct compositions. There aren’t memorable songs but familiar, beautiful themes, most notably the haunting main melody. Michel Legrand’s music is the film’s heartbeat, and it soars and dips according to the melodrama. The stylistic affectation may require a period of adjustment for some, but the technique works quite well. Life becomes music, with shifts in key and tempo expressing changes in the story and the characters' interiors. It's hard to imagine UMBRELLAS being as emotionally affecting as a more conventional musical.

Deneuve, one of the screen’s great, classic beauties, was twenty when she made this, her first major film. She radiates like few before or after her. Deneuve isn’t the only on screen beauty. Sets and clothes bloom with the colors of springtime flowers.

Sometimes magic gets captured on film. That happened with this simple, tear-stained story of young lovers. Demy drenches the film in color and music, providing an aural and visual palette for the heightened emotions. The vivid feelings even cause Geneviève and Guy to leave the ground, as seen in a tracking shot in which they glide above the street while the camera pulls back. THE UMBRELLAS OF CHERBOURG is mostly bright and boisterous, but the perfect ending lands on a moment of quiet beauty that expresses sadness for what was lost and happiness for what existed. The film breaks your heart, but what a glorious way to have it happen.

(This is a revised version of my DVDMon review of the Fox Lorber DVD. Koch Lorber has since released a better DVD edition, although I revisited the film at a summer film series. If the opportunity to see it on a big screen presents itself, go.)
Posted by Mark Pfeiffer at 7/10/2005 02:06:00 AM