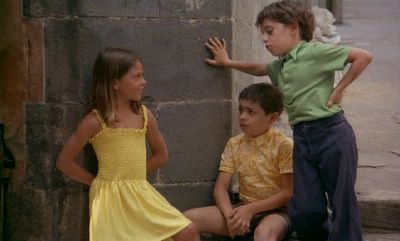 Husband: It’s terrifying to think of the way kids are in constant danger.

Wife: That’s not exactly true. I mean, whereas an adult would have been laid out for good, kids are as solid as rock. They stumble through life, but they’re not hurt. They’re much tougher than we are.
--from SMALL CHANGE

Childhood is a recurring subject in François Truffaut’s films, and the French auteur focuses his attention on its joys and tribulations in SMALL CHANGE (L'ARGENT DE POCHE) (or POCKET MONEY, as it's translated in the subtitles). The small French town of Thiers is home to the characters occupying the series of daily vignettes. SMALL CHANGE lacks an overarching structure to push it forward. Rather it simply observes the children and the adults in their lives.

Truffaut knowingly elicits memories of his seminal New Wave film THE 400 BLOWS (LES QUATRE CENTS COUPS) in early classroom scenes. The tone, however, is gentler, and although one boy’s story is tragic, SMALL CHANGE is optimistic.

The stories in SMALL CHANGE mostly take place around the school, an apartment building, and, where else for a Truffaut film, the movie theater. In a masterful sequence, a young boy is left alone in the apartment while his mother searches for her missing wallet. The boy wanders around his environment, picks up the cat, and then leans out the open window when the cat falls onto a lower perch. He is several stories high, and others watch with dread as the child gets precariously closer to the edge. Truffaut milks the scene for all its worth, amplifying the tension to maximum effect before the resolution. There are entire thrillers which generate less anxiety than this one scene. 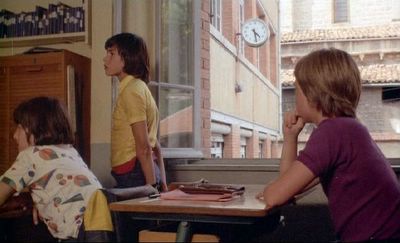 The joy of SMALL CHANGE is seeing the very natural performances of the children. What is remarkable is how this extends from the very young to those bordering on adolescence. Truffaut is so precise with his observations and unintrusive with the camera that we feel as if we are seeing a documentary instead of contrived movie scenarios. He finds the small pleasures of children and captures their fear and excitement, such as one boy’s first crush and kiss.

This delightful classic defies most cinematic representations of childhood. Unlike most films which feature or focus on children, SMALL CHANGE does not make them overly precocious or sentimentalize their experiences. A popular, misguided cinematic postulation states that children are merely miniature adults. Truffaut scoffs at such a notion, presenting the kids as they are in all their triumphs and mistakes. We smile when they’re being good and a little bad. Two brothers decide to let their parents sleep late and make a breakfast of chocolate milk and bread. One boy seriously, but innocently, tells a dirty joke on the playground. 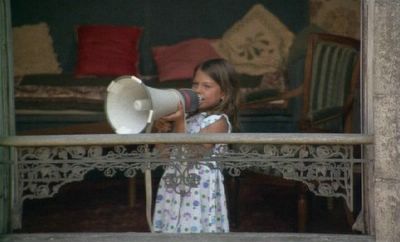 Children can be incredibly kind and selfless, but they can also be mischievous and cruel. They can also try the patience of adults, a frustration echoed by teachers and caretakers. An especially interesting scene takes place between a girl and her parents. They are going to a restaurant, and she wants to take her dirty purse. Her parents try to convince her to take a nicer one, but she is unrelenting. They threaten to leave her in the apartment while they go to eat. The stubborn child refuses to give in, and her parents do indeed leave her behind. She ups them when she uses her father’s bullhorn to broadcast her cries of hunger to the building’s other residents. Predictably the neighbors chasten the absent parents and assemble a rig to deliver food to her. The scene effectively portrays the child’s obstinance, ingenuity, and manipulative skills. It highlights the aggravation children can bring as well as the intelligence they possess.

Most of the stories are warmly amusing, but one unblinkingly looks at a troubled boy. It comes as no surprise at the end of the film to discover that he is abused, but Truffaut uses the prior events to create more poignancy for him and his situation. The boy, who wears the same clothes day after day, is unresponsive and unprepared in class, and the teacher comes down hard on him. Certainly he is crying out for help in the only way he knows how, but recognizing this is easier in hindsight.

SMALL CHANGE silently watches the action most of the time. An exception occurs after the boy’s abuse is revealed and one teacher delivers an impassioned monologue about children’s rights. The speech wouldn’t have sounded out of place during the Clinton administration and makes some good points, but it also strikes me as being very idealized, especially when the educator speaks of what would happen if kids could vote. The importance of community is emphasized throughout SMALL CHANGE and would support those who believe it takes a village to raise a child.

(This is a revised version of my DVD review. Follow the link for more information on the quality of and features on the DVD.)
Posted by Mark Pfeiffer at 7/14/2005 12:45:00 AM