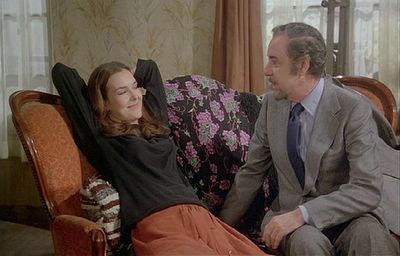 Carole Bouquet and Fernando Rey in That Obscure Object of Desire

For almost fifty years Luis Buñuel made movies that explored humanity’s perverse obsessions. THAT OBSCURE OBJECT OF DESIRE (CET OBSCUR OBJET DU DÉSIR) once again finds him plumbing the deep, dark recesses of sexual desire, and in this, his final film, the great surrealist throws one last curve at the audience, having two actresses play the lead female role.

Mathieu Faber (Fernando Rey) is a middle-aged, well-heeled widower who rapidly becomes fixated on the new, young maid Conchita (Carole Bouquet and Ángela Molina). She rejects his initial advances and abruptly quits the job. Mathieu is dejected, but they will meet again.

He is granted another opportunity to win her, and this time Mathieu and Conchita fall into a happy rhythm. He visits her in the apartment where she lives with her mother (Maria Asquerino). He delights in their time together. Mathieu believes she feels the same way; however, Conchita perplexes him at times. Undoubtedly this is part of the fascination, but his aggravation is slowly building. She sits in his lap and kisses him but resists going any further. Conchita eventually reveals that she is a virgin. Thinking that she wishes for their relationship to be legitimized in some fashion, Mathieu attempts to forge an agreement with her mother. Conchita will move in with him, and he will see to it that money is not a concern for either woman.

Conchita is appalled when she learns that he has attempted to purchase her. She breaks off the relationship. Mathieu is as despondent as ever. He will be afforded more chances to please her, but can he discover what she wants from him?

Through flashbacks Mathieu tells his story about “the worst woman on earth” to his fellow train passengers. They witnessed him dump a bucket of water on Conchita in the station and are very curious what would provoke such an unusual action. 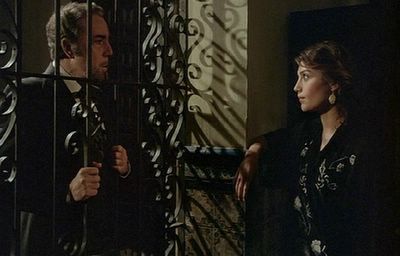 At face value Buñuel appears to use two actresses to express the duality of Conchita. She is virgin and whore, sadist and masochist, redeemer and punisher. She is all of these things yet none of these things, which adds to her mystery. The actresses do not look alike--the French Bouquet, with her kittenish face and cool demeanor, contrasts sharply with the earthy, Spanish Molina--and no effort is expended to make them resemble each other. Alternating them is an effective means of communicating different aspects of the character’s personality. Plus, in some mystical, cinematic way, the switching of actresses is seamless rather than jarring. It makes perfect sense, perhaps in a Jungian context, whether it is intended to or not. (In the interview reprinted in the Criterion DVD booklet, Buñuel contends that there is no rational explanation.)

THAT OBSCURE OBJECT OF DESIRE focuses on the struggle between the conscious and unconscious mind. Mathieu proclaims love for Conchita, yet from the very start his attraction is immediate and animalistic. His feelings are not intellectually derived, but he states his emotions as if they are verifiable fact. For much of the film he is disconnected from his more primal urges, from his shadow self, and until he is able to integrate these aspects of his personality, he is doomed to repeat the vicious cycle with Conchita. Mathieu’s inability to understand himself is at the core of his failures with her.

Buñuel wittily stages this tempestuous battle of the sexes, but he also leads us into darker corners of the heart and soul. Mathieu’s spurned attempts to have intercourse with Conchita are perhaps more humorous than correlating scenes in teen sex comedies because of the obstacles, or, on one occasion, garment, keeping him from fulfilling his desire. At the same time, these scenes can take on a more insidious tone. Mathieu reaches the point where he is unconcerned with Conchita’s wishes and must satisfy his urges. As he displays in other moments, he views her as an object, an item to be possessed and something to do his bidding. This is when Conchita resists most, determined to be seen for what she is instead of some mental ideal into which she has been constructed.

THAT OBSCURE OBJECT OF DESIRE is an intoxicating descent into one man’s experience of the emotional terrorism intended to shake him from his ways. Buñuel’s final film is a darkly comic piece that aims to do the same to us.

(This piece was originally published as a review of the Criterion DVD. Follow the link for more information on the DVD.)
Posted by Mark Pfeiffer at 7/12/2005 03:01:00 PM