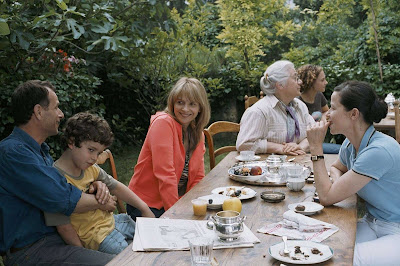 SUMMER HOURS is a gorgeous evocation of the ephemeral and the enduring, the tangible and the spiritual, and our relationship to the objects around us. Economics is treated as a science, but as the character Frederic asserts, it is more akin to religion. SUMMER HOURS explores that idea as the camera glides through the process of making preparations for one's death and the survivors deciding what to do with inherited items, appraising the objects, and selling them. In observing interactions with the things of our lives, writer-director Olivier Assayas reveals how objects become consecrated and worthless. One of the saddest shots in the film is of an unopened box perched on a sill. The three telephone handsets were politely set aside when the mother received them as a gift and have been overlooked as the house is emptied. Like the discarded playthings in TOY STORY, these unused and forgotten phones represent the passage of time and unfulfilled love. As a gentle reminder to be more mindfully engaged with the products sharing and cluttering our living spaces, SUMMER HOURS is a powerful piece.

TWO LOVERS is the kind of film Hollywood studios used to make for adults on a regular basis but which are now exceedingly rare. The small-scale relationship drama is a sharply observed and well-acted portrait of a man struggling to find happiness in the aftermath of romantic disillusionment. Joaquin Phoenix is excellent as the heartbroken Leonard, who is trying to repair his wounded self but often acts against his best interests. As the two lovers of the title, Vinessa Shaw does subtle and sensitive work as a woman who sees Leonard for who he is and accepts him in spite of his faults, and Gwyneth Paltrow is effective playing against type as the damaged and damaging temptation who Leonard can't resist.

Writer-director Tony Gilroy uses the espionage tale to scrutinize something more important than product development secrecy and conglomerate antagonism. In DUPLICITY he's really concerned with how and whether to believe someone who proclaims love. Gilroy keeps the twists coming with gleeful abandon, both in the elaborately planned thefts and mutual distrust between romancing thieves. Julia Roberts and Clive Owen stylishly play the smooth criminals while Paul Giamatti and Tom Wilkinson are savagely funny as business titans practiced in the art of destruction. Whether it's the high stakes of a heist or committed coupledom, DUPLICITY understands that all of the careful planning in the world won't lead to success if there's a lack of faith.

Hirokazu Kore-eda began as a television documentary filmmaker before transitioning to narrative fiction films. His keen observational sense is put to exceptional use in STILL WALKING, a lovely and heartbreaking portrait of family and all of its complications. Set during a family's annual memorial for the eldest son, who died several years ago in the act of saving another, STILL WALKING carefully watches the dynamics among three generations. Kore-eda captures a lot of truth about the passive-aggressiveness in family interactions and how knowledge is passed down. The film is so uncommonly perceptive about communication and the complexity of people that it feels as natural as breathing.

A SERIOUS MAN is the product of singular filmmakers humorously examining the eternal questions that have vexed humans since ancient times. The Coen brothers ask what if there is no meaning to life or suffering. Their film elicits choked laughs and stifled sobs, with an indistinguishable distinction between both reactions. Filtering this modernized tale of Job through the sensibility of an agnostic fatalist and Catskills comedian makes it oddly consoling and despairing.

INGLOURIOUS BASTERDS is an entertaining mix of art and trash cinema that has more to say about the movies than World War II. Then again, when hasn't that been true of Quentin Tarantino's films? Tarantino is likely never going to be considered a director with much of substance to say, but he may be the supreme champion of the cinema as the audience's alternative to the psychotherapist's couch. This revisionist fairy tale is tense, funny, and well-acted, qualities that all come to fruition in Christoph Waltz's startling performance as a Nazi colonel. It matters less what INGLOURIOUS BASTERDS means and more that it's a terrifically entertaining movie.

Building an animated movie around a grieving senior citizen and making it play for children and adults is a bold creative move, yet UP accepts and fulfills the challenge in surprising and delightful ways. The folks at Pixar, Pete Docter and co-director Bob Peterson in this instance, continue to match their ambition with accessibility, which is a pretty remarkable feat, especially for family films. This tender and fantastical adventure conveys that the journey is the reward. Whether you're seven or seventy, it's a message that can't be heard enough, especially when passed along in such a humorous and graceful way as it is in UP.

Director Steven Soderbergh and screenwriter Scott Z. Burns deftly present the puzzling information about corporate price fixing in a clear and highly entertaining manner in THE INFORMANT!, but for all of their hard, workmanlike efforts, the film is Matt Damon's through and through. At first Damon's hilarious performance as top exec-turned-whistleblower Mark Whitacre appears to be little more than playing the clueless schlub who narrates his exploits with an internal, analytical yammering, which is funny enough in its own right. Damon's layered work gradually transforms this unlikely hero into the type of person Whitacre's FBI handlers couldn't have anticipated encountering. The story about why Whitacre chose to help is fascinating, perplexing, and, in a certain light, outrageously funny.

The sterling craftsmanship in CORALINE is practically reason enough to see this stop-motion animated film, but thankfully the imagination extends to the spooky story as well. CORALINE bewitches and frightens with promises of what any child could ever wish for while simultaneously imparting a worthwhile message about the danger of always getting one's way.

Looking back on my sparse notes for something to write about 35 SHOTS OF RUM, I found I'd scribbled just three words: quiet, warm, lovely. Those words seem sufficient for saying all that's necessary about Claire Denis' mood piece focusing on four people in Paris who seem relatively satisfied with their lives even if a significant piece is missing in each. The pretty Tindersticks score and a pivotal scene in a diner set to "Night Shift" express more about who these characters are than words ever can.
Posted by Mark Pfeiffer at 2/07/2010 06:05:00 PM

Email ThisBlogThis!Share to TwitterShare to FacebookShare to Pinterest
Labels: 2009, best films of 2009