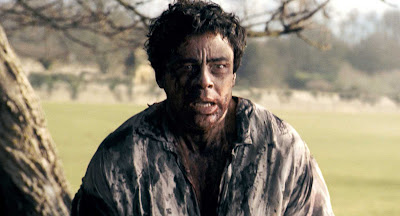 For traveling actor Lawrence Talbot (Benicio Del Toro) in THE WOLFMAN, his homecoming is not a joyous occasion. Having left the family's Victorian estate several years earlier without ever looking back, Lawrence returns to Blackmoor after receiving news of his brother's disappearance. Upon arrival he is informed that his sibling's maimed body has been recovered.

A medallion among the deceased's personal effects leads Lawrence to visit a gypsy camp on the fringe of the village in search of answers. Before he can gain any clarity regarding his brother's death, a werewolf attacks the camp and bites Lawrence. The wound heals quickly, though, and Lawrence's full recovery has him feeling better than before, that is until he encounters a full moon and transforms into a beast like the one who bit him.

The Wolf Man first appeared in 1941 with Lon Chaney Jr. in the title role. For this remake nearly sixty years later, director Joe Johnston and screenwriters Andrew Kevin Walker and David Self have greater special effects at their disposal and the freedom to show far more gore in the monster's rampages. Yet what's missing in this WOLFMAN is something timeless: the human cost that gives tragic meaning to the metamorphosis and potential cure. 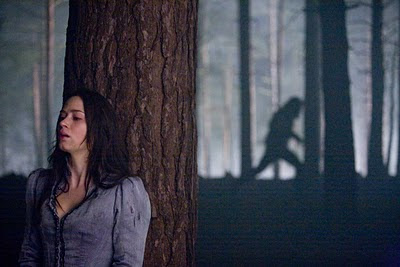 Del Toro comes across as uninterested in much of the film. He mumbles and sulks in the hallways and corridors of the dark estate but never conveys the inner torment that comes with his dilemma. More critically, the supposed romance that takes hold between Lawrence and his brother's fiancée Gwen (Emily Blunt) is nonexistent on screen. Except for the rare proclamation or action meant to reinforce their otherwise invisible passion, the single element that may grant this werewolf his salvation is not to be believed.

THE WOLFMAN'S choppy editing is more of a rhythmic problem in the narrative sections rather than in the action scenes. Whether it's the case or not, character-building portions feel as though they've been snipped in an attempt to minimize downtime between The Wolfman's maulings. The strained relationship between Lawrence and his father Sir John (Anthony Hopkins) needs more heft than some oddly placed flashbacks can give.

The action scenes can be reasonably diverting, especially when The Wolf Man breaks loose while under medical observation, but like the film as a whole, these violent outbursts also seem insubstantial. The only thing hiding behind THE WOLFMAN'S dramatic and visual murk is a patchy story.