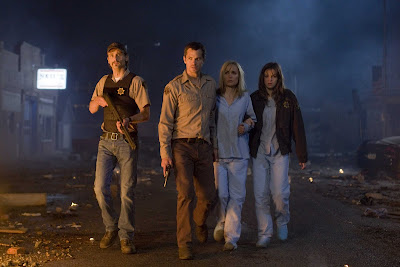 Sheriff David Dutton (Timothy Olyphant) doesn't usually face much trouble in his small Iowa town in THE CRAZIES, but when a crashed military plane delivers a biological weapon into the water supply, people start behaving as if they're mad. One man with a shotgun walks onto a field during a high school baseball game. Another traps his wife and child inside his home and seeks to burn it down.

Dutton and his deputy try to take control of the situation, but who's to say they aren't infected? Before long the military has stormed into town to contain the contamination and the resilient victims by any means necessary.

Breck Eisner's remake of George A. Romero's THE CRAZIES isn't bad so much as it is inconsequential. Without any palpable sense of terror or political subtext, the film is analogous to its not-exactly-zombie townsfolk who stagger about purposefully but blankly. 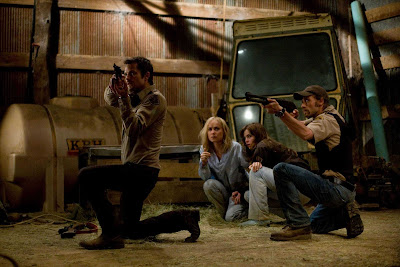 On command THE CRAZIES follows what the screenplay dictates but lacks the cheap thrills or substance to take it beyond a basic escape movie with a low sense of urgency. Early scenes of regular people behaving irregularly are suitably disturbing. When the population is forcefully herded and divided, it appears that THE CRAZIES is ready to explode with tension ,but instead it fizzles out.

Olyphant adds a slightly off-kilter spin on the sturdy and heroic lawman attempting to keep order and fight the powers that be. Joe Anderson's humorous and skittish performance as the paranoid deputy brings some uncertainty to a film short on surprises.

THE CRAZIES is professionally made and reasonably diverting, but it's not eventful enough for it provoke a response. In real life no one wishes for mass panic during a deadly outbreak, but this fictional account of such a situation could stand to stoke more hysteria.