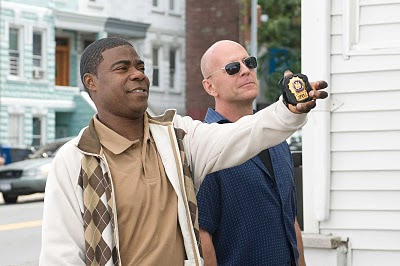 The action-comedy COP OUT features Bruce Willis and Tracy Morgan as longtime mismatched partners working for the NYPD. Following in the footsteps of many other movie cops, the duo makes some major mistakes that lead to their suspension. Jimmy Monroe (Willis) fritters away his time worrying about how to pay for his daughter's wedding while Paul Hodges (Morgan) obsesses over suspicions that his wife is cheating on him with their neighbor. When Willis is robbed of a highly valuable baseball card he planned to sell to pay for his little girl's big day, he and Morgan set out in hot pursuit of the thief.

With COP OUT director Kevin Smith of CLERKS fame attempts to make his version of a 1980s buddy cop comedy. To make the concept more obvious, COP OUT even comes with a synthesizer-heavy score by Harold Faltermeyer, who's best known for composing and performing "Axel F" from BEVERLY HILLS COP. Smith didn't write the screenplay, although his likely influence on it can still be found in his signature foul-mouthed, pop culture referencing dialogue. Even if many of the jokes in COP OUT aren't all that funny, Smith's facility with crude wordplay is what he salvages from this huge mess of a film.

Morgan's energy and cheerful idiocy help to sell the flat verbal and visual jokes more than they probably deserve. Whether he's chasing a drug dealing gang member while dressed as a giant cell phone or delighting in his videotaped failure being a viral hit, Morgan strikes the right tone. He and Willis don't generate any comedic chemistry, though.

Smith is less adept in guiding COP OUT'S serpentine crime investigations along and shooting the action scenes. He's never been known as a visually dynamic director, and his clumsiness in camera set-ups and movements hamper anything that isn't joke-oriented. COP OUT isn't top shelf material, so it's not as though Smith's limitations drag it down. Nevertheless, his skill set is not the right match. Dare I say that Michael Bay, who seems to fashion himself as something of a comedy filmmaker, might have served the screenplay better?