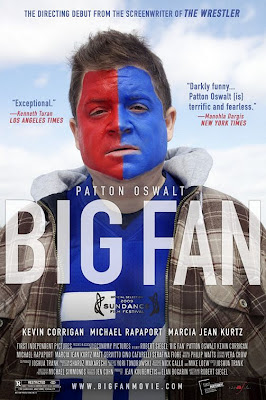 BIG FAN's Paul Aufiero (Patton Oswalt) gets little joy out of life except for passionately following and cheering on his beloved New York Giants.  36-years-old and still living with his mother in her thin-walled home, Paul occupies a cramped bedroom that doubles as a cluttered shrine to his favorite football team.

Paul's occupation as a parking garage attendant offers him little respect from his customers and family.  It's hardly the most fulfilling employment.  Tuning in to the local sports talk radio station eases the isolating drudgery of his job.  Paul's not merely a listener, though.  During work he writes and rewrites his pro-Giants opinions.  Late at night he calls the station to deliver these monologues straight from his spiral-bound notebook.  As a frequent caller he's easily identifiable as Paul from Staten Island and has developed an arch-enemy in Eagles fan Philadelphia Phil (Michael Rapaport).

Paul shares his Giants fanaticism with his best (and only) friend Sal (Kevin Corrigan).  They aren't able to afford tickets to see the G-men on the gridiron, but they're serious enough about the team that they watch the televised home games from the stadium parking lot so they can soak up the atmosphere.

One night Paul and Sal spot five-time Pro Bowl defensive player and Giants star Quantrell Bishop (Jonathan Hamm) in their neck of the woods.  Seeing him turns them into giddy little boys, Paul especially.  Bishop is his favorite player.  A poster of Bishop adorns Paul's wall, and he owns an NFL replica jersey with the punishing defender's name and number.

Paul and Sal decide to follow Bishop around their neighborhood and eventually into a Manhattan strip club.  There they muster up the courage to approach the player and express that they are big fans, but the encounter takes an ugly turn when a misunderstanding leads to Bishop assaulting Paul and putting him in the hospital for several days.  Paul's family, his lawyer brother Jeff (Gino Cafarelli) in particular, want him to press charges, but a lawsuit is the last thing Paul wishes to file.  After all, the incident has resulted in Bishop's suspension on a game-by-game basis, which is hurting the Giants.

Fans are quick to condemn athletes who admit to steroid use or get into legal scrapes but are suddenly compassionate and willing to turn a blind eye when the offenders play for their teams.  When it comes to the squads they cheer for, even the most levelheaded sports fans can be irrational.  BIG FAN's Paul does not rank among those supporters with a healthy perspective.  As an obsessive fan, he's invested his identity and happiness in a professional football team.  He's willing to put his well-being in the short- and long-term on the line rather than risk depriving the Giants a key player during their playoff push.

To the regular person, especially a non-sports fan, this is madness.  Nevertheless, Paul's decision makes sense when filtered through Oswalt's uncompromising performance.  His hangdog expression and defeated posture improve when he's engaged in his single passion, even if it's just discussing football.  Paul's family thinks he is in a dead end job and has no personal life, and from what we see, they're right.  Paul is an unlikable character.  He tends to think he knows better than everyone about everything and exhibits little patience.  Yet he's a relatable character in that his love for the Giants allows him to blow off steam about all of his dissatisfaction with the life he has.  Paul's biggest dilemma isn't whether to help himself or not.  If sues Bishop for assault, he's hurting the team, but he's also hurting himself.  Paul may not feel like he wins on a day to day basis, but he can win by proxy if the Giants are victorious on Sunday afternoons.

Writer-director Robert Siegel nailed a lot of the details in his screenplay for THE WRESTLER, and with BIG FAN he proves equally astute at observing the behaviors and mindset of the fan who sees no distinction between himself and the team.  The film's version of a Jim Rome-like radio call-in show is hilariously spot-on, with stale put-downs elevated to the likes of poetry  Oswalt has the antsy, stilted nature of the regular caller down pat as he waits for his turn to deliver his sometimes awkward reading of prepared taunts and predictions.  It's funnier still when he tells his deeply impressed friend that he improvises it all.  Siegel understands the silly things fans will do, whether it's flipping off the radio when hearing a member of the opposition's provocations or tailgating outside the stadium of a game one doesn't have tickets for.

Catholic symbolism abounds in BIG FAN and for good reason.  For Paul, following his favorite team requires constant faith and devotion and takes on the air of religious study and ritual.  He is a true believer in his team, so a clash between his worldview and personal needs produces a genuine crisis of faith.  It may sound absurd for something as inconsequential as a sporting event to have such a profound affect on the character's outlook, but plenty of fan bases and cities draw self-image from the performance of their hometown heroes.