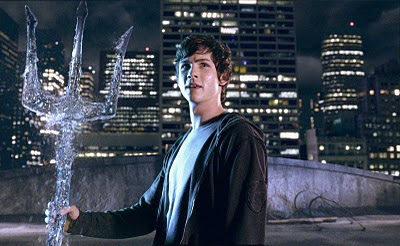 PERCY JACKSON & THE OLYMPIANS: THE LIGHTNING THIEF bears more than a passing resemblance to the Harry Potter series, and it isn't just because director Chris Columbus helmed the first two of those films. A teenage outsider discovers that he has heretofore unknown supernatural powers. To keep him safe and to train him in using his new talents, the young hero is sent to a magically protected place where he forms a tight inner circle with an unfailingly loyal best friend and a smart, beautiful girl.
In this case the protagonist is a demigod struggling with dyslexia and ADHD, and his pals are Grover (Brandon T. Jackson), the satyr assigned to protect him, and Annabeth (Alexandra Daddario), the half-human daughter of Athena. The son of Poseidon (Kevin McKidd), the Greek god of the sea, and Sally Jackson (Catherine Keener), Percy Jackson (Logan Lerman) hasn't an inkling that his life is anything but ordinary until a substitute teacher transforms into a Fury and attacks him during a field trip.
Percy unwittingly finds himself as the presumed instigator of the latest squabble among the eternally quarreling brothers Zeus (Sean Bean), Poseidon, and Hades (Steve Coogan). Zeus' lightning bolt has been stolen, and he believes that Percy is responsible. Zeus wants this most powerful weapon returned by the summer solstice, but Hades is angling to get his hands on it first. Operating under the assumption that Percy is the lightning thief, the god of the underworld abducts his mom and drags her to hell in hopes that the conscientious lad will head south to make a trade. 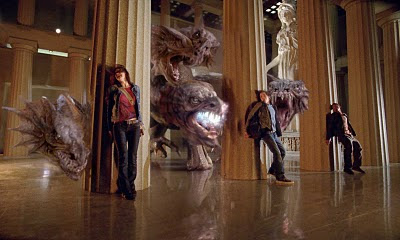 PERCY JACKSON & THE OLYMPIANS: THE LIGHTNING THIEF is a dutifully made kids' fantasy film that Columbus handles with the basic approach that he wielded on his faithful but vanilla HARRY POTTER adaptations. It's as though rather than adding anything to the material, his purpose is to stay out of the way of bringing the story's essence from page to screen.
The requisite effects-driven action sequences range from the suitably thrilling battle against a hydra in Nashville's Parthenon to the uninspired climactic showdown. Much of the dialogue and music selections couldn't be more on the nose, and the modern spins on Greek mythology aren't exactly going to win points for cleverness.
Regardless, this overly familiar tale about greatness lurking in an unlikely savior plays perfectly fine. The clunky early sections give way to a magical adventure that ought to keep Harry Potter fans tided over, if only partially satisfied, until the last installments of that series arrives in theaters.