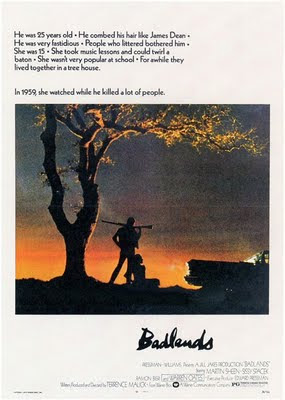 Set in the late 1950s, BADLANDS follows 25-year-old garbage collector Kit (Martin Sheen) and 15-year-old Holly (Sissy Spacek), who are running from the law for their killing spree that stretches from South Dakota to Montana. Kit looks like James Dean and shows interest in the red-haired, freckled-faced teen, who admits to not receiving that kind of attention at school. It’s no wonder this man from the wrong side of the tracks captivates her. That her father (Warren Oates) disapproves only makes Kit more attractive. Kit and Holly’s outlaw adventure across the Great Plains is instigated when he kills her father and burns down her home. It’s them against the world as the couple hightail it out of town for a life of survival off of the land and anyone who gets in their way.

BADLANDS is loosely based on a similar string of real-life killings by Charles Starkweather and his young girlfriend Caril Ann Fugate in 1958, although writer-director Terrence Malick uses their story as a jumping off point for his interests than an investigation of true crime personalities. Instead of a psychological portrait of two young killers on the road, it studies the mundanity of murder. Kit and Holly seem not to be disturbed or excited by taking lives. Killing comes naturally and is carried out without consideration for the act’s meaning. They kill because it is an avenue to getting what they want or preserving themselves. They kill because it’s what they do.

The way of nature is a consistent theme in Malick’s films, and here in his debut he cuts to the chase regarding an unyielding universe that operates outside of philosophical constructs. In the animal kingdom Kit and Holly’s deeds would not be judged within a moral framework, nor would they be when considering man’s dominion over all creatures great and small. Shooting a dog to punish a child or tossing a catfish into the yard to suffocate because one is angry are not doings deserving of guilt or ethical penalty much like raising cattle for slaughter is unobjectionable. (In these instances one must account for when the film takes place and was made.)

But of course humans conduct themselves within the parameters of what society deems acceptable and unacceptable. This is why Kit and Holly’s brazen attitudes about the sanctity of life shock the sensibilities. Holly’s flat, matter of fact narration and Sheen and Spacek’s dispassionate performances reflect the emptiness in their characters and the problem of living outside higher and human-determined law. (In fact, the only time they appear to conform to the world’s expectations is when they hide out in the forest free of constraints and playact as civilized people.) Kit and Holly are frightening not because they are unknowable but because their actions stem from nature.

Additionally, this outlaw pair is scary because they’re dumb and likable. Malick has come to be known and revered as a cinematic poet and philosopher, as a filmmaker who explores big ideas, but in BADLANDS in particular he also shows a knack for off-kilter humor. Kit’s cocksure carriage, as though he’s embodying a role in a movie in his head, and the weird ideas that both verbalize breed affection. There’s something hilariously twisted about an adult killer insisting his girlfriend stop by school to get her books so she can keep up with her studies while they are on the lam. If only their strange notions and convention breaking were less sociopathic.

BADLANDS is a clear announcement that Malick is and would be a major talent to watch.