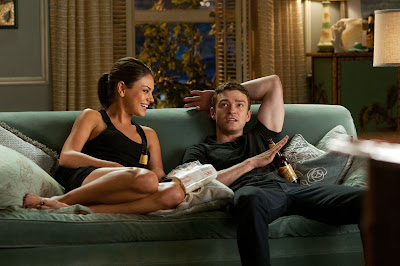 FRIENDS WITH BENEFITS (Will Gluck, 2011)

As in NO STRINGS ATTACHED, the protagonists in the romantic comedy FRIENDS WITH BENEFITS seek to enjoy carnal pleasures with a trusted pal without a dating relationship’s emotional complications or commitment. Dylan (Justin Timberlake) gets to know Jamie (Mila Kunis) when she recruits him to become the art director at GQ. The job requires him to move from Los Angeles to New York City. Without a social network in his new home, Dylan starts hanging out with Jamie, and the two become fast friends.

Both were recently dumped in their long-term relationships. Dylan and Jamie are feeling frisky and attracted to each other but don’t want to risk ruining their new friendship. Instead, they agree to have casual sex without any expectations of romantic obligations. In fact, such feelings and action are not just discouraged but deal breakers.

For awhile the pair enjoy the pleasure of each other’s company in and out of bed without needing to perform the duties incumbent on those who are dating. Gradually, though, the arrangement proves to be harder to navigate without feelings getting in the way.

Just as Dylan and Jamie wish to stake out a relationship on their own terms but ultimately conform to the norm, FRIENDS WITH BENEFITS wants to blow up the romantic comedy formula but finds itself succumbing to the template’s demands and sentiments. The characters and the filmmakers think they are more evolved than to follow established patterns. The time-tested sturdiness of these structures prevails, but the different paths to these ends is just as rewarding. 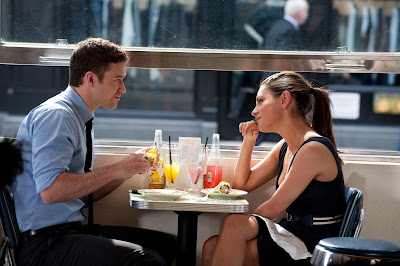 FRIENDS WITH BENEFITS benefits from Timberlake and Kunis’ sparkling lead performances. While it may seem common logic to build a romantic comedy around two people liking and getting to know each other, so many films in the genre substitute petty bickering for compatibility and push the lovers apart so they can have a big reunion. Timberlake and Kunis show why that way of doing business is often wrongheaded. As they flirt and grow fond of each other, so too does the audience gain affection for them. Here is an attractive pair matching wits and deepening their connection whether they realize it or not. In some respects, that’s all this type of movie requires. The lead actors use their star power to radiate warmth and humor. It’s simple and effective yet frequently bungled by the purveyors of romantic comedies.

FRIENDS WITH BENEFITS also looks better as the second film of the year with a similar but less successfully executed premise. Here the set-up and follow-through regarding commitment-free sex is actually explored, unlike in NO STRINGS ATTACHED. It helps too that FRIENDS WITH BENEFITS’ Dylan and Jamie don’t seem pathological in interpersonal communication, which was the defining characteristic of Natalie Portman’s NO STRINGS ATTACHED character.

Through its magnetic stars, funny crudity, and observation of people’s foibles in relationships, FRIENDS WITH BENEFITS consummates the deal that viewers enter with romantic comedies. Deliver regular laughs. Construct an atmosphere in which love can thrive. Mission accomplished.