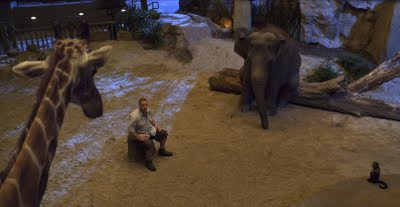 Five years after being rejected during an elaborate marriage proposal on the beach, Griffin Keyes (Kevin James) finally appears to be getting over the heartbreak. His ex-girlfriend Stephanie (Leslie Bibb) spurned him because his job isn’t important enough in her eyes, but he excels in his chosen profession and has become the head zookeeper at Boston’s Franklin Park Zoo. Seeing Stephanie at his brother’s engagement party rekindles old feelings and has Griffin working hard to impress her again.

The zoo animals want Griffin to be happy and scheme to make him look good in front of her, but true to form, he bungles the staged rescue. At this point the creatures choose to break their code of silence with humans and speak to Griffin so they can instruct him in the animal kingdom’s ways of courtship.

Griffin is understandably freaked out that he can talk to the animals, but he quickly adapts and follows through on the pointers he’s given. He begins walking with a swagger and marking his territory, even if it means urinating in potted plants at a classy restaurant. Still, Stephanie doesn’t seem really interested in Griffin until he leaves the zoo to work at his brother’s luxury vehicle dealership.

If a thousand monkeys at a thousand typewriters can produce Shakespeare, then ZOOKEEPER must have been banged out by one primate pecking away at a keyboard between sessions playing on a tire swing. This nearly laugh-free amalgamation of DOCTOR DOLITTLE and NIGHT AT THE MUSEUM spends far too much time on romantic comedy machinations and away from the talking animals that are presumably the film’s calling card. 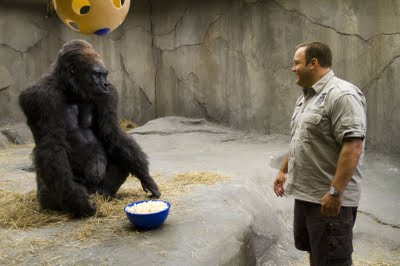 ZOOKEEPER is targeted at a family audience seeking amusement in the silly exploits of conversant zoo inhabitants, but it expends a lot of its running time and energy on the main character’s pursuit of a shallow woman everyone knows he’s not meant to be with. As unfunny as the wise-cracking zoo animals are, their antics are preferable to a boilerplate romance that no one’s heart is in. If a love story is absolutely necessary--and it really isn’t in a movie meant for children--keep it in the workplace. Have the animals conspiring to bring together Griffin and his compassionate co-worker Kate (Rosario Dawson). At least that way there will be more scenes with the zoo denizens.

Another ZOOKEEPER miscalculation can be spotted in the celebrity voice cast. Featuring Sylvester Stallone and Cher as a lion couple, producer Adam Sandler as a monkey, and Nick Nolte as a sullen gorilla, the roster is notable for its collective weirdness than effectiveness. Granted, the performers have been handed dire material, but the familiar, if not always easy to identify, voices put in minimal effort and tend to distract.

Nothing about ZOOKEEPER suggests it was ever anything but a crass excuse for selling tickets to parents perhaps tired of taking the kids to animated movies. Still, the product placements in the film are the most shameless of any in recent memory. Out of nowhere the gorilla asks if a casual dining place is as great as it sounds. Later on the zookeeper and the gorilla spend a raucous evening living it up in this particular establishment. More thought seems to have been put into this virtual commercial and truly strange scene than the remainder of this lazy excuse of a film.