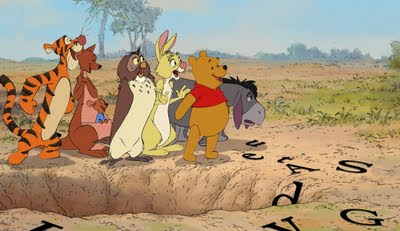 In WINNIE THE POOH the tubby little cubby and his friends in the Hundred Acre Wood work together to overcome the two issues of a most pressing nature in their community. Eeyore (Bud Luckey) has lost his tail, so a contest is held to find the best replacement. The prize for finding the ideal tail is a big pot of honey. Pooh (Jim Cummings) is already eager to help his pal, but the prospect of satisfying that rumbly tummy of his in the process doesn’t hurt his motivation.

Additionally, Pooh and the others plot to capture the Backson, a frightful creature that is imagined when Owl (Craig Ferguson) misinterprets Christopher Robin’s note and his promise to be “back soon”. A litany of terrible things the Backson does is invented, but the animals persevere in an effort to rescue the boy.

With its hand-drawn style (even if it is computer-animated) and quiet sincerity, the latest Disney animated film featuring A.A. Milne’s beloved characters is a delightful throwback to classic children’s entertainment. WINNIE THE POOH is what it always has been, or at least what many know from the decades of shorts and features the studio has made.

The characters aren’t susceptible to the prevailing trends of their times but instead submit to simple and gentle storytelling that endures across generations. Going to the Hundred Acre Wood at the movies is the equivalent of visiting a nature preserve. Here’s a space where viewers can take a break from the hustle and bustle that dominates the options in kids’ media diversions. 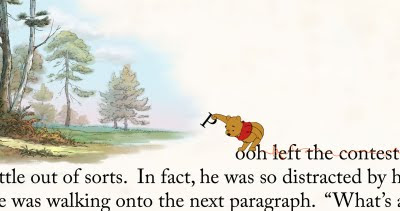 WINNIE THE POOH toys with its storybook origin, as the titular bear wanders onto the page, collects letters from sentences to assist in a task, and interacts with the narrator. These fourth wall breaking techniques never feel like meta intrusions on the material but like a child’s interaction with a parent reading the tales. The writers and animators have great fun playing with the text to sneak in some small lessons about narratives and make their funniest jokes.

Pooh isn’t smarter than the average bear, but he and his friends serve as wonderful examples for the little ones following their adventures. Although the gloomy Eeyore seems under a perpetual cloud, Pooh and company are typically filled with good cheer and courage, even when experiencing doubt and worry. Ever mindful of how children perceive a world that is at turns wondrous and scary, the film approaches the challenges these characters face in a manner that remains optimistic while not ignoring the bittersweet. To do so is to respect the youngsters who are watching.

WINNIE THE POOH is aimed squarely at kids, and its abbreviated running time of 69 minutes is just long enough to pass the time before they get too squirmy in the seats. It also shouldn’t be too long for adults who, like me, may find some of this overly familiar. (I swear I’ve seen these specific subplots before, but maybe they were variations on similar incidents.) I should note that the screening I attended had an inexplicably and verging on painfully loud audio presentation, one that’s in defiance of the tranquil nature of the work. It likely affected the degree of my evaluation for what is intended as a quiet, low key charmer.