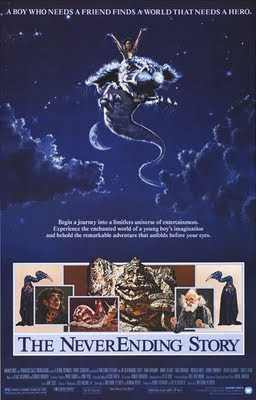 Still grieving the recent death of his mother and suffering at the hands of school bullies, young Bastian (Barret Oliver) is having a hard time in THE NEVERENDING STORY. His father’s advice is to get his head out of the clouds and buck up. It’s time to move on. No good can come from dwelling on the pain.

Such advice may sound all well and good, but for a kid who feels alone, these consoling words are neither comforting nor helpful. So Bastian retreats into books, which affords him the ability to escape his everyday worries and experience adventures from a safe distance.

One day while hiding from his three harassing classmates Bastian encounters a man in a book shop who is reading something he deems too dangerous for the boy. Like any child who has something forbidden dangled in front of him, Bastian can’t resist wanting to know what such a book might contain. He borrows it when the bookseller steps away for a few moments. Instead of going to class and facing his tormentors again, Bastian slips off to the school’s attic, a dusty old place that looks more like a medieval sorcerer’s quarters than an academic storage area.

Bastian curls up with the book, THE NEVERENDING STORY, and begins reading about Fantasia, a land which is being slowly overtaken by The Nothing. After this darkness in the form of encroaching storm clouds arrives, where once there was something, now there isn’t anything. The Childlike Empress (Tami Stronach) knows how to combat the malevolent force but is unable to resist it because she is dying. Enter the child warrior Atreyu (Noah Hathaway), who is summoned and sent on a quest to find a cure for the Empress before The Nothing destroys everything.

As a testament to the power of books, the often gloomy THE NEVERENDING STORY comes off as a READING RAINBOW episode covering existentialism. This is heavy stuff for an epic children’s fantasy, even if it’s leavened by Henson-esque creatures. The inhabitants of Fantasia and a mourning Bastian aren’t trying to ward off tangible villains but are dealing with the eternal struggle against despair.

Whether it’s the production’s German roots showing or the prevailing children’s psychology of the time, THE NEVERENDING STORY confronts angst head on instead of offering any coddling or easy reassurance. The directness empowers the tale’s frightened heroes because courage is defined as the ability to stand up to one’s fears and author solutions in the continuous battle with mortal concerns. Reading is not a passive activity for Bastian but an active engagement that permits safer interaction with individual and collective anxieties. In a bit of meta exercise, it is suggested that those of us viewing are similarly employing the imagination through THE NEVERENDING STORY to keep at bay or conquer fundamental doubts and uneasiness.

At the helm of his first English-language film, director Wolfgang Petersen treats the kid-oriented material seriously to overall benefit and detriment. THE NEVERENDING STORY doesn’t condescend to young viewers. In so doing it provides them with plenty to mull over while taking in the stranger delights akin to ALICE IN WONDERLAND by way of THE DARK CRYSTAL. The lighthearted moments and playful exchanges, such as a Rockbiter extolling the vintages of particular stones he’s chowing down on and an ancient turtle ambivalent about impending doom, hint at a less stern composition, but mostly the playfulness juts out awkwardly in a film whose personality prefers affection at arm’s length.

THE NEVERENDING STORY’s virtues derive in part from its weirdness and uncompromising tone. Much of children’s entertainment instructs about self-actualization, but rarely is the message realized in a manner as respectful of its young audience’s intelligence.