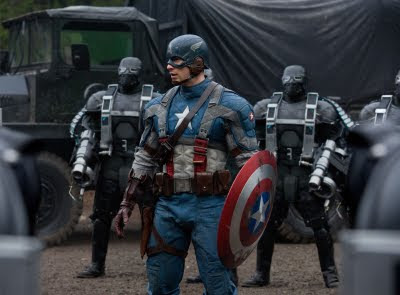 In CAPTAIN AMERICA: THE FIRST AVENGER scrawny Steve Rogers (Chris Evans) doggedly attempts to sign up for military service during World War II. His puny stature gets him declared 4-F time and again, but each rejection just makes him try harder on his next recruiting office visit.

Dr. Abraham Erskine (Stanley Tucci) notices Steve’s selflessness and nobility and offers the gung-ho New Yorker a special opportunity to serve his country. The expatriate German scientist has developed a treatment that can transform Steve into a super soldier. Being dosed with the serum and vita-rays will greatly enhance his physical appearance and moral fortitude. Although the procedure is not risk-free, Steve accepts without hesitation.

Despite reaching his full potential through technology, military superiors limit Steve to playing the role of Captain America to promote war bond sales. While on tour to perform for the men fighting on the Italian front, Steve finally gets the chance to prove himself in battle. British officer Peggy Carter (Hayley Atwell) and genius inventor Howard Stark (Dominic Cooper) help him slip away for a daring one-man rescue mission of captured troops. 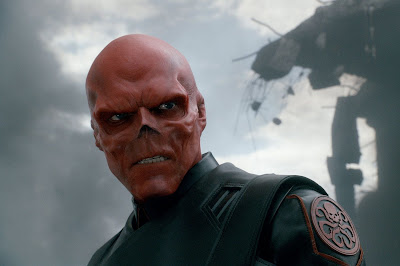 It’s here that Steve encounters Johann Schmidt (Hugo Weaving), otherwise known as Red Skull. The onetime Nazi commander underwent an earlier and flawed version of Dr. Erskine’s treatment, which has magnified his capacity for evil. Schmidt has designs on taking over the world himself and has split from Hitler to lead HYDRA. Schmidt possesses a powerful cube of the gods called the tesseract and is harnessing its energy to create unbeatable weapons. If Steve is to protect his countrymen and the world as a whole, he must defeat Schmidt.

CAPTAIN AMERICA: THE FIRST AVENGER director Joe Johnston also helmed the retro comic book adventure THE ROCKETEER. Once again he shows a knack for conveying old-fashioned awe and wonder in patriotic service without shifting into jingoism or recruitment ad. Both films feature heroes who are quite square, but the period settings play to the advantage of the characters’ sincerity. By golly, Steve Rogers is going to perform his civic duty however he can. In the era of the tortured superhero in movies, it’s refreshing to come across one with enthusiasm and a pure spirit.

By virtue of his unsullied goodness, Captain America himself is a one-note character, but help is on the way from a strong supporting cast. As Red Skull, Weaving makes an exceptional villain to be feared. The latex mask he wears in the bad guy’s disfigured condition looks exponentially better than the CGI’d GREEN LANTERN character he resembles. Cooper gives the perfect amount of swagger and smarts to the character who will be Iron Man’s dad. 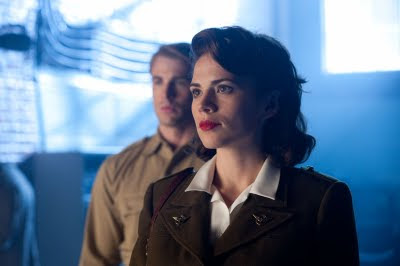 Atwell’s Peggy Carter is more than a romantic prop for the hero. She’s as tough and driven as the boys fighting the good fight, yet she also let down her guard when admiring Steve and being disappointed by him. For as misguided as CAPTAIN AMERICA’s conclusion is, Peggy and Steve’s radio conversation, which echoes Powell and Pressburger’s A MATTER OF LIFE AND DEATH, identifies the human cost that pays for valor.

CAPTAIN AMERICA is the last cinematic piece of the puzzle that will make way for next summer’s superhero extravaganza THE AVENGERS. At times it feels as though CAPTAIN AMERICA suffers because it is a prelude to the blockbuster-to-be. The opening scene not only ruins the potential emotional impact of the climax, but it also gives it away within the first ten minutes. On top of that, the final scene suggests that everything preceding it was merely a long teaser for the admission to be bought next May. Johnston’s fleetly assembled superhero film deserves better, but the botched finish doesn’t undo all the goodwill that CAPTAIN AMERICA earns.