2011 in Film: The Honorable Mentions 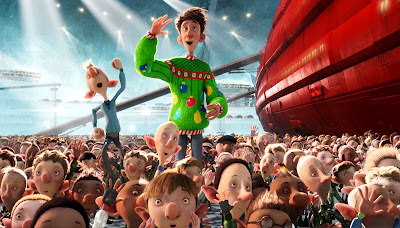 Packed with as many jokes as Santa’s bulging bag of gifts, ARTHUR CHRISTMAS treats viewers to a visually inventive, quick-witted dessert for holidays to come. While the 3D isn’t essential, ARTHUR CHRISTMAS uses the extra dimension better than its animated competition.

Werner Herzog makes a case for 3D as an artistic tool as he employs it to convey the space in a place where few are likely to be permitted to visit. The documentary inspires a reverie in seeing and contemplating the prehistoric paintings in southern France’s Chauvet Cave. To enter into it via this film is to consider our species’ origin, marvel at what their lives must have been like, and become aware of how far we’ve come.

Steven Soderbergh’s thriller lays out a realistic and chilling scenario that shows how the world’s population could be threatened by what’s transmitted from a cough, a handshake, or a common bowl of nuts at a bar. If PSYCHO made people reconsider taking showers and JAWS forced second thoughts about going for swims in the ocean, CONTAGION could inspire obsessive hand-washing and stocking up on antibacterial sanitizers.

Director Alexander Payne takes a family on a sad, funny, and heartwarming journey as they discover what is truly important to them as individuals and as a group. Set in Hawaii, THE DESCENDANTS digs into the regular lives of people who can’t avoid problems and sorrow simply because they inhabit a place that looks like paradise on earth. The rocky mental landscapes are difficult to navigate even while surrounded by beautiful, lush terrain. Payne and his two co-screenwriters hit upon the core of emotion with startling clarity.

The pleasantly strange HANNA examines womanhood by way of a Grimm fairy tale crossed with an action film. As a socially naive teenager with lethal survival skills, Saoirse Ronan continues to prove why she’s among the best young actresses around. Director Joe Wright dazzles with a colorful and delirious vision of modern life to an outsider’s eyes. 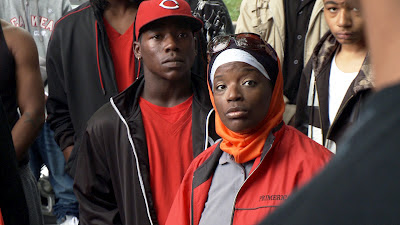 Steve James’s powerful documentary about the people trying to break the pattern of youth violence in Chicago gives a ride-along on an emotional roller coaster. THE INTERRUPTERS manages to be touching, frustrating, and uplifting as it depicts the depth of the problem without claiming to have a solution.

Werner Herzog makes clear his objection to capital punishment in this documentary, but the director isn’t interested in voicing a polemical argument. Instead, in speaking to two death row inmates, their family and friends, the victims’ relatives, and those tasked with carrying out executions, he uncovers the narratives people write for themselves to endure terrible experiences and hold onto their humanity.

Director Sean Durkin and actress Elizabeth Olsen made two of the year’s finest debuts with the paranoid drama MARTHA MARCY MAY MARLENE. Durkin seamlessly blends the protagonist’s abusive past in a cult with the post-traumatic stress she feels while at the refuge of her sister’s home. Complementing the technique is Olsen’s affecting performance, which delineates the struggle to differentiate between past and present.

In OF GODS AND MEN a group of French monks in an Algerian community are forced to choose whether to stay and serve the locals or flee for safety from the encroaching civil war. The quiet and studied nature of the decisions these men make beautifully portrays the struggle of living according to a set of beliefs, especially when following a higher calling may risk one’s life.

Steven Spielberg’s technically proficient study of war's dehumanization is rendered in a swooningly earnest style in WAR HORSE. The battles sequences are as thrilling and tragic as the World War II fighting in the director’s SAVING PRIVATE RYAN while WAR HORSE’s determinedly old-fashioned storytelling proves a suitable match for its consideration of the old and the modern converging.
Posted by Mark Pfeiffer at 2/07/2012 04:07:00 PM