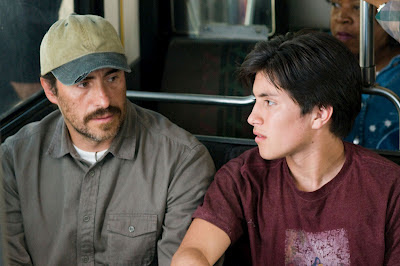 Undocumented worker and single father Carlos Galindo (Demián Bichir) finds himself between a rock and a hard place in A BETTER LIFE.  His boss Blasco (Joaquín Cosio) plans to shut down his landscaping business and return to Mexico. Carlos could keep Blasco’s clients and have more control over his employment if he will buy his boss and friend’s truck, but he doesn’t have enough savings to afford such a big purchase.  Although he asks to borrow money from his sister, he’s resigned to rejoining the rest of the day laborers who gather outside a nursery waiting for folks to drive by in search of hired hands.

To his surprise, his sister loans him what he needs.  This favor fills Carlos with hope for the potential of achieving greater financial stability that can facilitate moving from his East Los Angeles home to a part of the city with a better school for his teenage son Luis (José Julián).  Carlos worries about Luis falling in with local gangs and not having the bright future he wants more than anything for him.

The pride Carlos feels in going into business for himself quickly gives way to devastation when the man he selected to help him on jobs steals his truck and tools. With little information to go on, Carlos and Luis search the city for the thief and the truck. 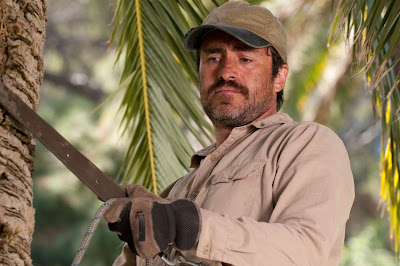 Rather than engaging in a political debate about illegal immigrants, A BETTER LIFE observes the human issues at stake. Certainly it possesses great empathy for the characters, but A BETTER LIFE is more interested in observing the common struggles than making judgments about those who have snuck across the border.

Director Chris Weitz and screenwriter Eric Eason’s contemporary American spin on BICYCLE THIEVES excels at depicting the challenges, fears, and dreams of those here illegally.  Although Carlos has been in the United States for a long time, he lives under the persistent threat of deportation.  He initially balks at the idea of buying the truck because a routine traffic stop could send him back to Mexico and separate him from his son.  He has no legal recourse when a lawyer cheats him out of money or when his truck is stolen.  Nevertheless, he has secured a measure of relative comfort. The one-bedroom house Carlos and Luis call home is no palace, but it’s a major step up compared to the thief’s home in an apartment packed wall to wall with fellow Mexicans in a racially volatile section of L.A.

Bichir, who earned an unexpected Academy Award nomination, impresses throughout A BETTER LIFE as he portrays a cautious man whose compassion is reflected in his actions more than his words.  His love for his son is evident, whether in accepting the couch for his nightly resting spot rather than the bedroom or exuding joy in picking out a present for Luis.  Carlos’s fundamental decency in how he treats those who he needs help from and who have wronged him speaks to the good example he seeks to set.

A BETTER LIFE’s sense of place and eye for detail are strong, but the too-smooth style and rushed dramatics are at odds with the hardscrabble existence on display. The subject matter calls out for an aesthetic like the film’s neorealist inspiration than the rather tidy treatment Weitz applies.  In 98 minutes A BETTER LIFE blitzes through all the major issues that an undocumented worker might face, thus shortchanging them from accruing any emotional weight.

That race to touch upon the various ordeals finally slows down for a big scene near the end when Carlos answers his son’s question about why his parents chose to have him.  Bichir expresses the fatherly affection and optimism he feels for his boy while Carlos is at his most defeated point.  It’s almost sufficient to tip the critical scales on a film that means well to a fault but tries to do too much with too little.