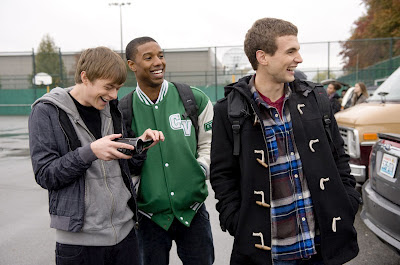 In CHRONICLE three high school students crawl into a hole in a field one night and find something otherworldly.  Soon thereafter the guys discover that they have developed telekinetic powers.  At first this newfound ability to move things with their minds is something they use on a small scale, like building things with Legos or turning on a leaf blower to blow up their female classmates’ skirts.  Their telekinetic skills increase as they use them, and it isn’t long before they’re moving cars or flying.

Andrew Detmer (Dane DeHaan) is arguably the most talented of the trio and the one who has benefited the most from acquiring superpowers.  With a dying mother and angry, alcoholic father at home and a spot at the bottom of the social ladder at school, Andrew was lonely and miserable.  He was videotaping everything as a way of distracting and protecting himself, even if doing so also brought unwanted attention. His recordings supply most of the “found footage” that comprise CHRONICLE.  In these documents it is easy to see that the intense bond Andrew forms with his cousin Matt Garetty (Alex Russell) and big man on campus Steve Montgomery (Michael B. Jordan) is as meaningful to him as their superhuman gifts.  The weak, unpopular one now feels strong and important.

As Voltaire wrote, and as another superhero film reminds us, with great power comes great responsibility.  Matt suggests that they need to establish some rules for how they use their powers, but Andrew for one has no desire to have any limitations placed on him. 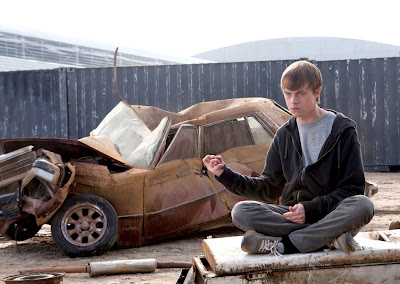 The overwhelming number of superhero films of late and the seemingly limitless ability of CGI have taken some of the wonder out of displays of dazzling feats beyond ordinary human potential.  CHRONICLE restores that thrill through the actions and reactions of three teenage boys who behave like their real life counterparts might. Director Josh Trank and screenwriter Max Landis devote significant time to the guys goofing off.  Their prank-pulling and limit-pushing is not that far removed from what the JACKASS crew might attempt if they had the capability to control objects with their thoughts.

The acclimation to superpowers portion of CHRONICLE is good fun in a particularly adolescent male way, but without any boundaries or check on such power, the outcome is eventually bound to result in ugly consequences.  Andrew’s telekinetic talents greatly exceed his emotional maturity, so he channels his antisocial rage in harmful ways.  CHRONICLE echoes CARRIE and the Columbine shootings as the bullied evolves into the bully, culminating in a spectacular battle in and above downtown Seattle.

Trank employs the found footage construct more to provide a firsthand account than to suggest someone has unearthed and assembled the videos. The casual nature of the teens’ activities and their emotional extremes feel more immediate in this form.  Plus, since Andrew can control the camera with his mind, CHRONICLE can position it anywhere, giving the film the visual freedom that the characters enjoy.