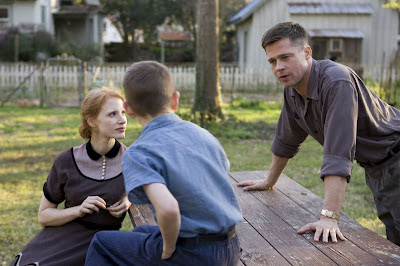 Terrence Malick’s deeply felt THE TREE OF LIFE finds immense potency in its universal evocation of growing up. Malick and his editors expertly weave together the micro and macro strands into a stunning tapestry in praise of creation and natural and supernatural adoration. With its solemn tone and dominant use of hushed voiceover, THE TREE OF LIFE functions as a two-hour, eighteen minute prayer. Malick’s sacred depiction of eternal human conflict, both inward and outward, is one of the great achievements in cinema for this year and any other.

CERTIFIED COPY is an endlessly rich study of a relationship as the platonic ideal versus its all too human form. Abbas Kiarostami utilizes Juliette Binoche and William Shimell as signifiers of their genders and worldviews, not necessarily as individuals, as he charts how two people are when a relationship originates and the versions of them that exist years later. This mind-blowing drama of intellectual rigor and emotional resonance uses reflective surfaces that allow CERTIFED COPY to look different every time you see it.

A New York teenager’s reactions to a bus accident serve as Kenneth Lonergan’s way of exploring the national response to 9/11 in this sprawling drama. MARGARET contains untold layers as it follows Anna Paquin’s Lisa lose her innocence in expecting the outside world to conform to her inner life and learning that it won’t. This highly ambitious film vibrates with rage and sorrow and yet also points toward the connections to ease the pain. MARGARET is a major achievement but has been difficult to see. For Columbus-area readers, it’s lone public screening in town takes place March 7 at the Wexner Center for the Arts.

TAKE SHELTER considers where the line is that separates a prophet from a madman. Jeff Nichols follows the progression of the protagonist’s mental dilemma and feels the strain that comes from agonizing over a man’s capacity to do right by his family. In an outstanding performance, Michael Shannon portrays such a conflict with great sensitivity and control.

This nimble science fiction-inflected thriller excites via the urgency of a soldier’s mission to stop a terrorist from blowing up a train while bringing compassion to the repeated scenario he cannot affect. SOURCE CODE hints at an intriguing moral question regarding utilitarian philosophy, but whether the film amounts to anything more than a highly entertaining thrill ride isn’t necessarily important.

Playing with his Steven Spielberg movie maker kit, J.J. Abrams fashions a retro blockbuster in SUPER 8 that’s part monster movie and part coming of age story. Many of my favorite films of the year dealt with coming to terms with loss and letting go of the past. SUPER 8 just happened to do so with large, impressive setpieces and tender and funny interactions between kids on the verge of adolescence.

With MELANCHOLIA Lars von Trier crafts a bold, intensely felt vision of depression via the story of two sisters awaiting Earth’s obliteration by a newly discovered planet. While existence hangs in the balance, von Trier’s fatalistic embrace of impending doom is starkly beautiful and strangely reassuring. Without question Kirsten Dunst’s Justine is the director’s surrogate, someone who finds comfort in the awareness that years of despondency and anxiety were not for naught. Now that her worst possible fear can be confirmed, what else is there to do but submit to the inevitable? In a film full of strong images, its final one is most striking for what it says about accepting those things that cannot be changed.

The art of observation gets a fascinating showcase in TINKER TAILOR SOLDIER SPY. The Cold War espionage thriller is a model of narrative minimalism. With nary an overblown James Bond setpiece in sight, director Tomas Alfredson displays marvelous precision in showing how an agent might do the difficult work, and Gary Oldman is the epitome of quiet cool as the investigating George Smiley. TINKER TAILOR SOLDIER SPY is low key, which is only appropriate, but it is also electrifying when it cuts through the noise to the buried truth.

For TABLOID Errol Morris finds a bizarre true story from 1977 known as the Mormon sex in chains case. A former beauty queen was accused of following a man to England and then abducting, seducing, and raping him. How much any of it is to be trusted is left up to the viewer of this wildly entertaining documentary, but Morris suggests that the desire to impose a narrative, whether for personal or commercial reasons, overrules the truth.

Although the main character is diagnosed with cancer, 50/50 is less about the disease and more concerned with the struggle for loved ones to provide support and for the afflicted to allow them to help. This sharply written and performed dramedy tends toward the glossy side, yet it persuades with healthy doses of sincerity and decency.

(Author's note: Since it's a question I've fielded often enough, A SEPARATION [JODAEIYE NADER AZ SIMIN] is not included on this list or my Honorable Mentions for a very simple reason.  I haven't seen it.  It has not yet opened in Columbus nor been available to me. To date, the only chance I had to see it was at the 2011 Toronto International Film Festival, but it wasn't on my schedule.)
Posted by Mark Pfeiffer at 2/07/2012 04:30:00 PM

Email ThisBlogThis!Share to TwitterShare to FacebookShare to Pinterest
Labels: 2011, best films of 2011, The Tree of Life, Top Ten lists, year in film