In BIG MIRACLE a family of three gray whales gets trapped in the ice off the Arctic coast of Point, Barrow, Alaska.  TV news reporter Adam Carlson (John Krasinski) is shooting another story when he spots the father, mother, and baby whales poking through a hole in the ice.

A frozen column of ice is blocking the whales from swimming south.  To survive the whales keep a hole open by regularly bringing their beaks and heads above the water’s surface so this small patch doesn’t freeze.  While this method helps them for the time being, it can’t be sustained indefinitely, whether because of the injuries they may incur or colder temperatures that may freeze the hole shut.

Adam sends his report to his home affiliate in Anchorage and then watches as it ignites a media circus and an international effort to save the creatures.  Adam’s Greenpeace activist ex-girlfriend Rachel Kramer (Drew Barrymore) rushes north to see what she can do.  Reporters flock to the small, isolated town, including the ambitious Jill Jerard (Kristen Bell), who views the story as a chance to do more serious work.

With the sly encouragement of his wife, who hints at the public relations benefits from providing assistance, oil company executive J.W. McGraw (Ted Danson) offers the use of his barge to break the ice.  Two Minnesota inventors (James LeGros and Rob Riggle) see an opportunity to showcase their water-warming product and jumpstart sales for their company.  The Inuit community initially favors killing the whales for their people to use but recognizes how their custom will play to a worldwide audience and throws in their support.  The Reagan administration also gets involved, in part to counter its negative environmental record and help current Vice-President George Bush in a Presidential election year. 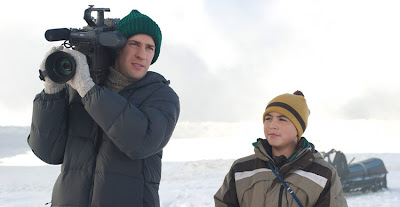 The big miracle of BIG MIRACLE is that it turns out to be a heartwarming, serious-minded, all-ages film.  Based on a real 1988 operation to save three whales, it’s predictable and plays out like a large scale TV movie, but BIG MIRACLE is invested with solid craftsmanship and a nuanced view of how idealism, pragmatism, and politics intersect.

Although no one will mistake this for the family version of Billy Wilder’s cynical media satire ACE IN THE HOLE, director Ken Kwapis and screenwriters Jack Amiel and Michael Begler examine the self-serving motivations of all involved with the rescue.  The irony is that with everyone acting in their own vested interests, something great is achieved that would otherwise have been too expensive and inefficient to pull off.

The characters are drawn in surprising and atypical ways.  Barrymore’s activist is driven by the purest intentions and possesses the moral upper hand, but she’s consistently the most unpleasant person on the scene. Rachel means well, perhaps more than anyone else.  She also contains the potential to create the most problems.  Conversely, most films would fall back on TV reporters standing in as the convenient villains.  While Adam and Jill hope to exploit their coverage of the story for career advancement, the fact that they’re giving the whales airtime helps push the effort along.  Without the journalists and photographers, public interest would likely be too low for all of the parties to make the commitment.

If a movie is referred to as being for the whole family, it’s usually shorthand for computer animation, like the Pixar films; sensory overloading but bloodless action, like the SPY KIDS films; or puerile comedy, like Eddie Murphy’s string of PG-rated films.  BIG MIRACLE lives up to the classical definition of a family film.  It’s thoughtful, moving, funny for kids and adults, and provides discussion fodder for the car ride home.