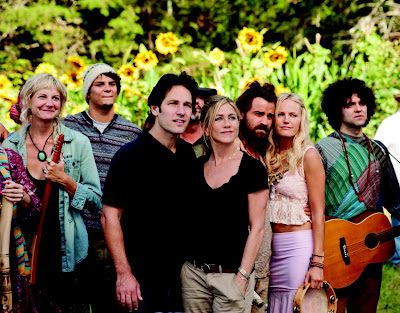 When unemployed George and Linda (Paul Rudd and Jennifer Aniston) go broke in WANDERLUST, they pack up their things and leave Manhattan with the intention of getting a helping hand in Atlanta from his rich but miserable brother Rick and sister-in-law Marissa (Ken Marino and Michaela Watkins).  Worn down after a long day’s drive, they decide to make an overnight stop at the next closest place rather than push on to their destination.

The GPS directs them to Elysium, which sounds like a charming bed and breakfast but turns out to be a rural Georgia commune.  Although they’re reluctant at first to stay, they enjoy a restful night spent with the friendly hippies who live there.  George and Linda continue on to Rick and Marissa’s but soon bail on the thought of living with them until they get back on their feet.  Rick lords his generosity over them, and George can’t stand the thought of slaving away at his sibling’s port-a-john rental company day in and day out.

So it’s back to Elysium for the frazzled couple.  They commit to trying out the alternative lifestyle for two weeks before deciding what comes next.  Linda gradually adapts to the carefree ways of the farm while George finds it all a bit absurd and holds out hope of a job back in New York City coming through. 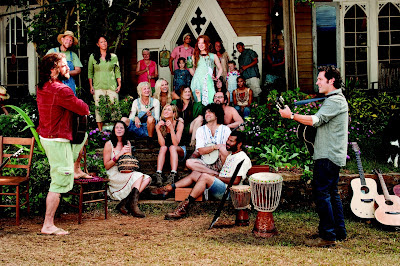 Considering that a significant part of WANDERLUST’s comedy is rooted in laughing at hippy-dippy conduct well past its cultural expiration date, the commune scenes are an inconsistent source of humor.  The gentle mocking of outdated awareness and hopelessly idealized philosophical viewpoints lands softly when successful, perhaps because WANDERLUST is hitting easy targets.  For instance, Justin Theroux’s Seth, who passes for an alpha male in the leaderless community, never seems quite deluded enough for him to be the foolish caricature he’s meant to be.

The scenes in regular society tend to produce the biggest laughs.  George and Linda’s two scenes with a real estate agent played by Linda Lavin highlight the ridiculous contortions in which contemporary life can bend things.  The couple’s indecisiveness over whether they’re prepared to commit to purchasing a place hits the modern and urban sense of uncertainty.  The parrying over how to describe the home in question--is it a micro-loft or a studio apartment?--strikes at how branding and rebranding keep definitions slippery for those who need to know what they might acquire.  It’s easy to understand how losing the illusions of high pressure civilization might appeal to a couple burned by it.

Rudd has become something of a comedic MVP.  While his finest work isn’t in WANDERLUST, he’s still very amusing in the ways in which he wrestles with George’s choices and twists in agony over the nonsense and temptations around him. Aniston, who often comes across a smidgen or two too uptight in her recent films, takes to her character’s awakening to laissez faire living with gusto.

Written and directed by and featuring several members of the sketch comedy troupe The State, WANDERLUST has a freewheeling, improvisational aesthetic that doles out enough solid jokes, even if it does so erratically.  Enough jokes connect from scene to scene to make this a mostly worthwhile comedy even if feels like less than the sum of its best lines and reactions.