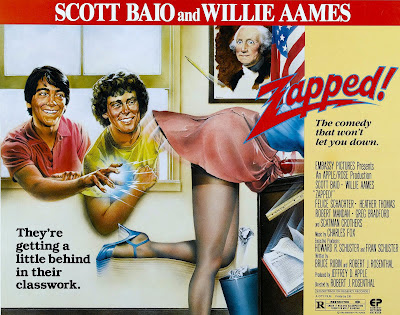 Since purchasing a Roku one of my preferred ways of using it is to peruse Netflix’s instant offerings and pull up a random 1980s film remembered from video store shelves past. Chances are I’ve never seen what I end up selecting or have such a dim memory of these mostly forgotten mediocrities (and worse) that it’s like seeing them anew. Watching surefire stinkers from upwards of thirty years ago isn’t the best use of my time, but yesterday’s turkeys are stuffed with some viewing value now that they’re cultural relics. So that’s why ZAPPED! made it onto my film log, OK?

Released near the peak of Scott Baio’s stardom, ZAPPED! features the teen heartthrob as a high school science nerd who gains telekinetic powers. Aspiring botanist Barney Springboro (Baio) has a private laboratory in the school where he grows plants and works on experiments with mice. He’s unaware that some additional ingredients have dribbled into his latest concoction. The solution explodes while he’s working with it, but rather than being disfigured and horribly injured Barney acquires the power of controlling objects with his mind.

At first Barney doesn’t realize the full extent of this gift, but he finds it helpful for diverting attention when a teacher puts him on the spot in class and catering to his surging hormones by popping open the sweater of cheerleader Jane Mitchell (Heather Thomas). He tries to keep this new talent to himself, but his friend Peyton (Willie Aames) and goody-goody class president Bernadette (Felice Schachter) happen to come across him testing his skills in the lab.

Peyton wants to put his friend’s telekinetic abilities to use getting the hapless school baseball team to win games and aiding him in impressing Jane so she’ll dump her college boyfriend Robert (Greg Bradford). Bernadette has visions of co-publishing a study about this parapsychological breakthrough in a scientific journal. The affable Barney goes along with the wishes of both.

An item in the January 6, 1982 Spokane, Washington Spokesman-Review suggests that the to-be-released film, referred to as WHIZ KID, will be rated PG, which might have appeased Heather Thomas. The actress refused to be topless in ZAPPED! and filed a complaint with the Screen Actors Guild. (This explains the prominent and unusual mention of her body double in the credits, although this disclaimer didn’t satisfy her.)

Typically in this sort of film the humble, nerdy hero gets an inflated sense of self, chases the hottest girl in school at the expense of the kindhearted one beside him, and then rediscovers his true identity. If ZAPPED! serves any purpose, it’s to show why that familiar construct is in place. Barney doesn’t do any of that. He remains levelheaded and stays loyal to the nice, brainy girl who first shows interest in him. Sure, he asserts himself against his parents, but they’re the fearful, uptight sort who create the template for authority figures in Twisted Sister videos. The result of his mostly responsible behavior is a film with little dramatic urgency and no hurdles to overcome. There’s a fundamental reason why films don’t have a nice guy stay nice and allow good things to continue to happen to him. It’s boring.

The film’s mostly straight arrow nature and the racy characteristics imposed on it combine into a predictably unstable compound. ZAPPED! fancies itself to be the bad boy and flirts with that image, but this low-rent production is far too wholesome and blandly unfunny for that affectation to be convincing.

Comedy-wise ZAPPED! serves boilerplate high school hijinks and inorganic film parody inserts. The undersexed teacher and principal subplot is notable for its tonally discordant risqué suggestion and irrelevance to everything else. As a pent-up baseball coach Scatman Crothers gets the obligatory marijuana-fueled dream sequence. The sight of him riding a bicycle beside Albert Einstein while his wife fires salamis at him sounds funnier than it is.

ZAPPED! isn’t exactly a parody film, yet it loosely riffs on CARRIE, especially at the end. Just imagine that the prom concluded with the triumphant telekinetic protagonist comically undressing most fellow classmates rather than being covered in pig’s blood and leaving them to burn. A STAR TREK sequence is integrated quite awkwardly, as though it were inserted as an afterthought. While goofing on THE EXORCIST, trying on De Niro’s TAXI DRIVER mirror monologue, and (presumably) paraphrasing the most famous line from ON THE WATERFRONT may have been less played out in 1982, all of these referential jokes all flat.

While Aames comes off as the unconvincing cinematic ancestor to Seann William Scott’s Stifler in the AMERICAN PIE series, Baio and Schachter perform respectably enough. Baio fulfills his obligation to make the Tiger Beat crowd swoon as he gets to be smart, sensitive, and calm and collected. Surprisingly Schachter isn’t tarted up or dumbed down, as these films typically require. They make a cute couple. Too bad they’re in a film aimed at the mouth-breathing audience.

Chances are ZAPPED! would have been garbage whether it were clean or dirty through and through. It just happens to throw the paper recyclables and used deep fryer oil in the same container.