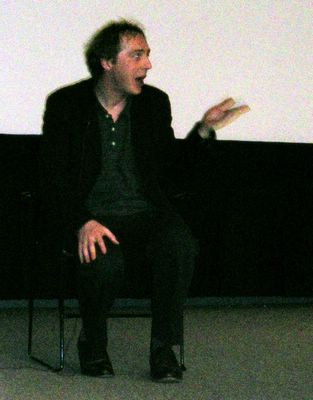 This month the Wexner Center for the Arts is holding a retrospective of Arnaud Desplechin's films. To kick-off the retro, the director was in attendance tonight for a brief introduction and Q&A following the regional premiere of his latest KINGS AND QUEEN (ROIS ET REINE). It's a bewildering--maybe brilliant--film that's still ricocheting off the inside of my skull. Sometimes you see a film that you can't quite explain or be sure that you've understood it all, but it leaves such a firm imprint that you think you've witnessed a major work from a major talent. My gut feeling is that KINGS AND QUEEN is one of the year's best films, but I'm going to need more time to process it.
Posted by Mark Pfeiffer at 4/16/2005 11:18:00 PM