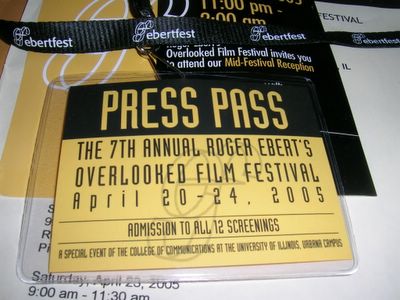 Champaign-Urbana's most fashionable neckwear from April 20-24, 2005

My press pass for the 7th annual Roger Ebert's Overlooked Film Festival arrived in the mail yesterday, so I'm now all set for the second of three festivals I'll be attending in the course of three months. Now if only I could make it to Toronto in the fall...

Last year I posted updates on the blog during the festival--the pre-fest countdown, opening night, day 2 comments, leftovers from the first two days, the obligatory "I'm wiped out" post, and the day 4 recap--but I don't expect to be able to do so this year. As far as I know, my hotel doesn't have a computer for guest use, which I'd need seeing as I'm laptop-less. Still, expect coverage of some sort after the fact on this site in addition to a recap at The Film Journal.
Posted by Mark Pfeiffer at 4/08/2005 05:32:00 PM