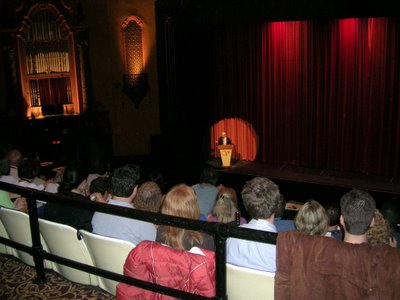 An opening night view from the balcony (April 20, 2005/Mark Pfeiffer)

The operative word for the opening night of Roger Ebert's 7th Overlooked Film Festival is rain.

A roped-off VIP section aside, seats are not reserved, so experienced festival attendees know to arrive early, especially on opening night. I made it to my hotel in adequate time and planned to get to the Virginia Theatre by 5:30 at the latest, a full two hours before PLAYTIME would begin. Armed with an umbrella to fend off the steady rain, I lined up about halfway around the corner of the building. The first people in line had already been there for several hours. That's more than I would have been willing to wait, but it netted them an advantageous--and dry--spot under the marquee. My umbrella was no match for the buckets of cold rain that drenched me from head to toe. Nothing like going to the movies and having your shoes squish every time you take a step.

Although the weather outside was frightful, PLAYTIME was so delightful. (Still, what I would have given for a hair dryer...) Critics too freely dispense the word masterpiece--and yes, I'm probably among the guilty--but there isn't a more apt description for Jacques Tati's film about the absurdity and beauty of modern life.

Tati reprises his M. Hulot character, a genial fellow with a loping walk. (Rowan Atkinson's Mr. Bean could have descended from Hulot, although he's prone to mean-spirited outbursts that are unfathomable for Tati's kind soul.) Yet the film isn't about Hulot, or anyone in particular, for that matter. Instead PLAYTIME observes a day of the ordinary moments in (then) contemporary Paris. People mill about a large airport terminal and various undistinguished buildings in the film's first half. Then they congregate for a raucous time at a Parisian restaurant's error-plagued opening night.

While degree of difficulty isn't something that should come into play when evaluating a film's merits, PLAYTIME is an exception if ever a film deserved it. Tati's direction is nothing short of brilliant. It's almost incomprehensible how he coordinated the exquisite timing needed for scenes to play without descending into chaos. There's a lot of mirroring within the frame, such as when a worker lays down glue for a floor tile while a waiter presents a meal. Tati uses the rhyming actions to tell the joke. The frame is packed with details, so many that it's impossible for a single viewing to reveal the visual jokes tucked away in each quadrant. (I saw PLAYTIME in 70mm last summer, but there are plenty of things I missed, such as a man doing a fake striptease while on stage at the restaurant or the riff on the home as a department store window display.)

PLAYTIME is strong visually--the geometry is as rigorous as that in a Mondrian painting--yet it employs very few colors. Grays, blacks, and whites predominate. This less vibrant color scheme, though, is in keeping with the film's aesthetic of finding pleasure in a modern landscape that is antiseptic, impractical, and uniform. Even with this emphasis on visuals, Tati uses sound just as expertly. Whether it's using air conditioning to mimic the sound of a jet or building a scene around Hulot's "dialogue" with an unusually noisy chair, Tati's inventiveness shows no limits. In fact, PLAYTIME is not subtitled, but everything conveyed through sound and image is understandable on a universal level.

I've said before that PLAYTIME can't have the same impact on a TV screen versus a projected 70mm image. I'll amend that slightly. Familiarity with the film from a theatrical screening provides the necessary clues for where to look on one's home set-up.

Film critic Jonathan Rosenbaum joined Ebert on the stage for a post-film discussion. It was probably the best chat of this type that I have ever seen. It doesn't hurt to have a great movie to talk about, not to mention a student of this particular film in Rosenbaum. I didn't take notes, but one interesting item he mentioned was that there are versions of PLAYTIME with different languages emphasized.

All in all, this was a great kick-off to the festival. In a sense, it's not fair to the upcoming films. Surely they can't equal one of the all-time greats, but then again, this isn't a competition.
Posted by Mark Pfeiffer at 4/20/2005 11:48:00 PM