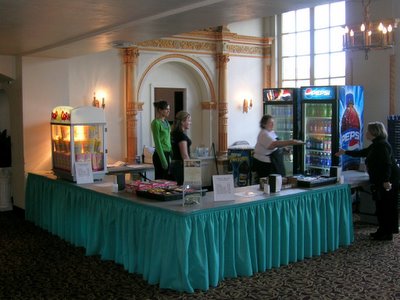 You have to get up pretty early in the morning to drive to the University of Illinois, eat breakfast or a semblance of one (a necessity on these marathon days) at a Green Street coffehouse or the Illini Union, and snag a halfway decent seat at the panels. The Elderhostel group brings a sizable contingent, and they are usually the first ones camped out at these discussions. Anyway, another day, another panel discussion, and again no note-taking. Keeping track of all these films is enough effort.

Things every Ebertfest attendee should know:

-If you're a passholder, bring something to leave on your seat between films. You don't want to stick by it all day long.

-A seat cushion isn't a bad idea. The Virginia's seats can get uncomfortable after sitting in them all day.

-Time your bathroom visits wisely. (Judging by the lines I've seen, this goes double for women.)

-Stay hydrated and eat meals on a regular basis. It will help you make it through the ten to twelve hours at the theater. The Virginia's concession stand offerings are priced as reasonably as any you'll find in a movie theater, but don't let that tempt you into subsisting on pop and candy bars. 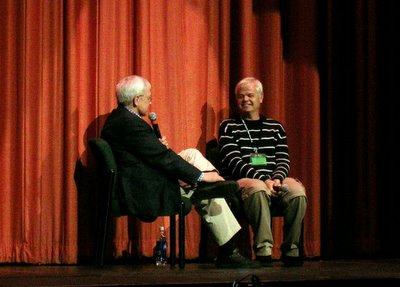 First on the docket today was YESTERDAY. The South African film touches upon societal problems--in the instance, the ravages of AIDS in Africa and the community stigmatization of the afflicted--but keeps the focus on conveying the main character's story rather than pound out a message.

YESTERDAY is named after the protagonist, a woman coping with a dying husband and raising a daughter. Her health is slowly detiorating, but the nearest doctor takes a couple hours to reach by foot. The physician is in that place just once a week, and with long lines forming early in the day, getting there is no guarantee of being examined and treated. Yesterday (Leleti Khumalo) eventually gets an appointment. The prognosis reveals that she is HIV-positive.

There's an elegant simplicity to the storytelling in writer-director Darrell Roodt's film. He captures the sense of place and community so well that Yesterday's environment and circumstances, foreign as they are to most of us, don't seem incomprehensible. YESTERDAY'S story may be localized, but the emotions are universal. That's where the film's power resides.

Khumalo's performance should be credited for much of the film's impact. She exudes quiet strength and inner peace in spite of her character's problems. Her acting is all the more impressive because her face speaks volumes that can't be equalled with words.

YESTERDAY is well made on a formal level. The composition and cinematography are outstanding. There's also a marvelous moment in the score during which it sounds like a death moan or rattle when Yesterday's husband is in death's throes.

Perhaps more than any other film that has played at the festival, this is the one best fitting the overlooked designation. To my knowledge it has not received a commercial U.S. theatrical run and won't. It will play on HBO, which will probably put it in front of more potential viewers than if it had received a cursory theatrical release. 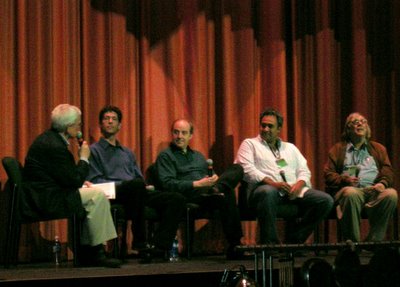 Ebert with two members of The Alloy Orchestra, David Poland, and Jonathan Rosenbaum

Each year one of the festival's treats is a silent film with live musical accompaniment. The Alloy Orchestra is back again, this year with the 1925 version of THE PHANTOM OF THE OPERA starring Lon Chaney as the monstrous title character.

Through several film versions and the beloved stage musical, the plot should be familiar by now. A disfigured man, known as the Phantom, lurks below the Paris Opera and commands that the lead role be given to Christine (Mary Philbin). The Phantom is not acting out of charity. He desires Christine, who is unnerved by his underground world. When things do not go his way, the Phantom goes out about wreaking revenge on the Opera.

Joel Schumacher's film adaptation of the musical was pretty silly, but I enjoyed the spectacle of it. This PHANTOM is scarier and more cinematically accomplished. It too can seem ridiculous--dramatically PHANTOM doesn't make much sense--but the overwrought emotions in the silent film tend to connect despite this quality.

The 1925 film and Schumacher's version are strikingly similar, especially the sets. He did some smart borrowing, though, because the sets are magnificent. The special effects are impressive for the time. The chase at the end and the chandelier crash, of course, deliver everything audiences wanted then and expect now. The masquerade ball, shot as an early color sequence, and the spotlighting of color on the Phantom's red death costume adds some spice to the visuals as well.

The 1925 PHANTOM has it all over the 2004 remake in the horror department. The creepiness of the Phantom's mask and the hideousness of his exposed face don't compare to how Gerard Butler was made up. The Phantom's monstrous obsession and behavior is matched with the brutality of his demise, but I suppose those aspects wouldn't have been at home in the more romance-oriented musical.

The Alloy Orchestra provided a wonderful aural experience through their percussion-heavy accompaniment. Watching them perform can be as enjoyable as the films they're in concert with. 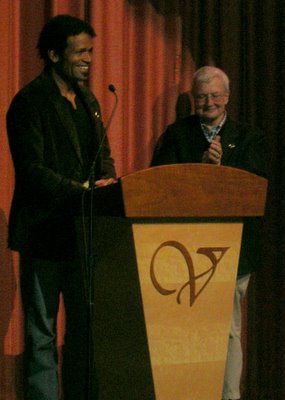 I saw BAADASSSSS! in the course of reviewing 2004 releases, and it holds up well on second viewing. (I've yet to see the movie that is this film's inspiration.) Better than most movies about movies, BAADASSSSS! captures the determination and perseverance needed to bring one's vision alive. (This is the most thorough depiction of a movie's gestation from conception to release that I recall seeing.) Melvin Van Peebles had to work outside the system at great cost to himself personally and financially. He believed in the project and would let nothing stand in his way, be it lack of money, worsening eyesight, etc. Some might find such lengths extreme, but BAADASSSSS! makes clear how this creative and political fervor drove him to accomplish the task.

Funny and raucous--the Virginia's sound system got its best workout of the festival with Van Peebles' film--BAADASSSSS! was an energetic way to finish Friday night. Van Peebles brought along a bonus for the appreciative festival audience. BAADASSSSS! GRANDKIDS! takes the whole son playing the father thing even further, with his children recreating these roles in an amusing short. 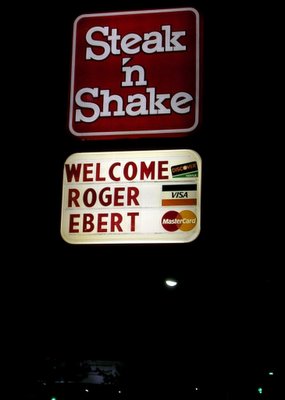 Unlike other years at this festival, I have been able to eat meals at normal times, so I hadn't needed to make a late night trek to Steak 'n Shake. It isn't unusual to see the festival VIPs there, if you're interested in that sort of thing. (Ebertfest is more intimate than most film festivals, so if attendees desire to speak with one of the visiting filmmakers, chances are the opportunity will be there.) I popped in for a carryout order and then went back to the hotel. The only day with four films is ahead, so after some late night sustenance, a smidgen of sleep is beckoning.
Posted by Mark Pfeiffer at 4/23/2005 01:21:00 AM