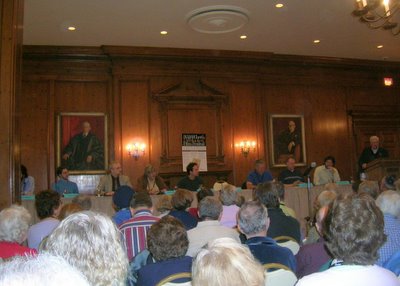 The first full day of Roger Ebert's 7th Overlooked Film Festival began with a panel discussion moderated by the famed critic. I've been to the four previous festivals and taken notes at these sessions, but I never do anything with them. Today I didn't take any notes. You'll just have to trust me that it was worth crawling out of bed to hear.

The first film of the day was MURDERBALL. From year to year the "overlooked" tag gets stretched but never perhaps as much in the case of this film and Miranda July's ME AND YOU AND EVERYONE WE KNOW. Ebert saw both at this year's Sundance Film Festival and liked them so much he wanted to show them to the Champaign-Urbana audience (and other outsider stragglers like me). So call them "pre-overlooked", even if July's film will be playing Cannes soon. Regardless, maybe it's better for Ebert to use this festival as a platform to assist films that can use all the help possible in a crowded marketplace. (MURDERBALL and ME AND YOU AND EVERYONE WE KNOW open commercially this summer.)

As it turns out, I'd already seen MURDERBALL. As a programmer for the inaugural Deep Focus Film Fest, I'd seen this in the course of making selections. This was my first crack at seeing this outstanding doc on the big screen. 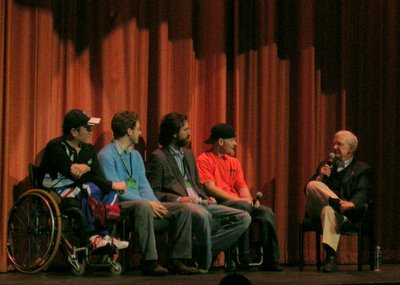 Upon learning that MURDERBALL is about quadriplegics who play wheelchair rugby, the first question that comes to mind is “How?” Henry Alex Rubin and Dana Adam Shapiro’s lively documentary clears up the common misconception that quadriplegics don’t have use of their arms and then proceeds to show these athletes ramming themselves into one another in pursuit of victory on the court.

The filmmakers train their cameras on the charismatic individuals of the 2002 U.S. quad rugby team competing in the World Championships and 2004 Paralympic squad. MURDERBALL pays special attention to Mark Zupan, a muscular, tattooed star of the sport, and Joe Soares, a legend for his aggressiveness and nail-hard attitude but also an aging player who’s losing his edge. When Soares is dropped from the team, he takes a job as the captain for archrival Canada, placing the man in direct, heated competition with his former teammates.

MURDERBALL is a thorough examination of how quadriplegics go about their day-to-day lives. Most of it is shot from the perspective of being in a wheelchair, and the co-directors incorporate similar camera moves, such as court-long push-ins that introduce the various quad rugby teams.

While it’s an effective sports film—there’s great potential for a terrific narrative feature based on this material—the players and their enormous spirits take precedence over the outcome of the games. MURDERBALL isn’t soaked in cheap sentiment and doesn’t soften the hard edges of the more irascible people profiled. They don’t perceive themselves as victims, and many probably don’t view themselves as role models. Still, one can’t help but be inspired by how these guys have adjusted to their circumstances and live to the fullest.

Like the players, MURDERBALL is funny and brash. It’s a deeply felt film with outsized personalities. Zupan and Soares are a combustible duo and MURDERBALL’S ostensible stars. Their hostility toward one another gives the film a terrific rivalry, but just as powerful as their enmity are the stories of their lives off the court. Zupan reunites with the friend who has never forgiven himself for getting behind the wheel in the accident that led to his injuries. Soares grapples with the fallout of his fierce competitiveness and how to accept his sports-averse son. Uplifting, informative, and energetic, MURDERBALL shreds preconceptions and entertains like few films can.

The co-directors were in attendance, but the attraction was seeing Zupan and Soares on stage after the film. No fights broke out, but it's obvious that there's still tension between them. (In the film Zupan says he wouldn't piss on Soares if he was on fire.) 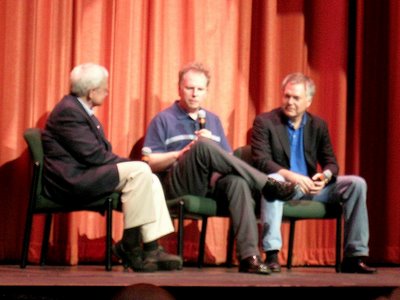 Next up was Guy Maddin's THE SADDEST MUSIC IN THE WORLD, preceded by his amazing short THE HEART OF THE WORLD. (Oddly enough, at this point in the festival I still haven't seen a film new to these eyes.) In SADDEST MUSIC Isabella Rossellini plays a Depression-era, double amputee beer baroness who holds a contest to find what country plays the planet's saddest music. (Whether intentional or not, having this follow MURDERBALL made for a compelling exploration of acceptance and denial in dealing with physical impairment.)

THE SADDEST MUSIC IN THE WORLD isn't a silent film, but it retains much of the tone and style of those old melodramas. Maddin is some kind of aesthetic genius in how he mimics film's early days. He gives the images a bygone era's texture and authenticity. Yet modern technology is what permits him to make something as altogether fresh and astonishing as this.

Formal aspects aside, THE SADDEST MUSIC IN THE WORLD is worth seeing because it is a consistently funny film. Maddin takes good-natured pokes at cultural stereotypes and the absurdity of what he's putting on screen. The American songs are about disasters and suffering, but gosh darn it if they don't have an upbeat twist. The film also works as a sort of musical, with Maria de Medeiros' nymphomaniac Narcissa providing a song highlight.

To put a more serious read on the film, Maddin seems to be dealing with the commodification and denial of grief. They're two sides of the same coin. The contest is a way for the competing cultures to wallow in the pain and attempt to profit from their most morose music. The film's only color sequences--two funeral scenes and the final musical number--are when these façades of grieving are stripped away, which are also the moments when grief is most vivid and immediate.

In this post-9/11 world, it can become all too easy to see commentary on the situation everywhere. It seems to me that some of that is present in THE SADDEST MUSIC IN THE WORLD--Rossellini's towering glass legs, anyone?--but such dissection will have to wait until another time.

Item of interest from Ebert's post-film discussion with Maddin: The Canadian director's THE HEART OF THE WORLD was his way of remaking Abel Gance's lost film THE END OF THE WORLD. Maddin wanted to do his own remakes of the great lost films from the silent era. 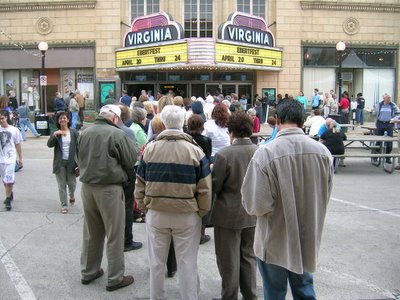 Outside the Virginia Theatre

The day wrapped up with James Foley's AFTER DARK, MY SWEET. Collie (Jason Patric), an ex-boxer who acts like he got hit one too many times upside the head, meets the widow Fay Anderson (Rachel Ward) in a bar. Before long he takes up residence in a trailer on her property. Her Uncle Bud (Bruce Dern) sees easy money in abducting a rich man's boy and holding him for ransom, but only if he can convince Collie and Fay to get on board with the plan.

AFTER DARK, MY SWEET takes its conventional film noir elements and executes them well, leading to an ending that, while not unsurprising considering the genre, catches us off guard nonetheless. Much is ambiguous, which adds to the mystery. (Whether it's fatigue or not paying attention, I completely misread a revelation about Collie, so it seemed even more mysterious to me.) 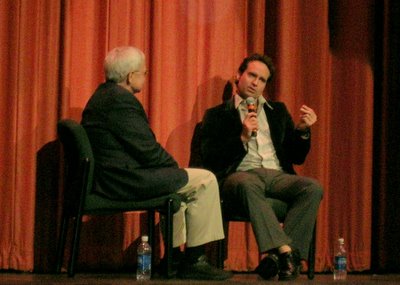 Patric carries himself like a boxer, as if he's always ready to spar. It's a Method performance with shades of Brando. The most impressive quality of Patric's acting here is how he plays "crazy" without making it broad or actorly. It's a critical choice because it keeps the audience uncertain as to how unhinged he may be.

Mood is often equally as important as plot details in noir, and AFTER DARK, MY SWEET is quite effective in capturing a sense of desolation. The film was shot in Indio, California. In 2001 my brother and I were driving from Ohio to California when his car broke down a ways from Indio. I don't remember much, but it felt about like the end of the earth, with nothing and no one around save for the highway patrolman who pulled over to see if we needed any help.